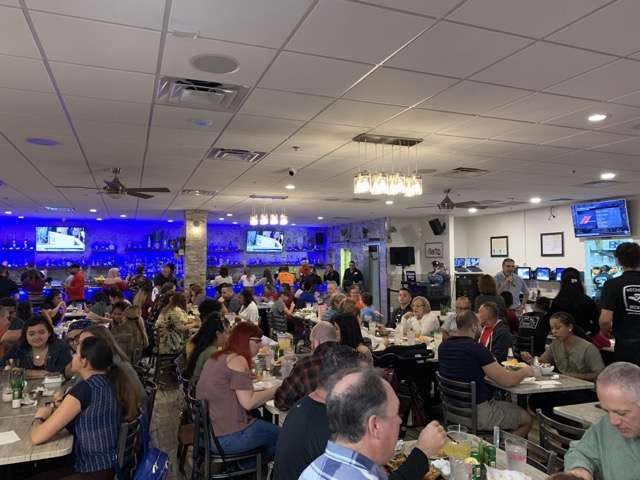 It would seem that the place to be on a Friday night if you live in the area of Chickasaw Trail and Lake Underhill Road is Don Julio’s Mexican Kitchen and Tequila Bar.

It was so crowded that the only seats available were at either of the bars, the tequila bar in the title or the ceviche bar on the other side of the room.

That suited us just fine because it was the ceviche bar that drew my attention to this particular D. Julio’s over the original in Lake Mary or the other location in Waterford Lakes. That’s because the ceviche bar is under the direction of chef Roberto Treviño, a former contestant on variations of the Iron Chef cooking competitions who previously owned El Buda, the Latin and Asian fusion restaurant in downtown Orlando.

I selected the Pulpo a la Mexicana from the ceviche menu, mainly because from my vantage point at the bar I could see the large plate of octopus tentacles the ceviche chefs were gathering from to construct the platters. The bite-sized pieces were tender-firm and had a pleasant citrusy taste..

For my entree I chose the “pick 2” dinner combination, opting for a ground beef taco and a chicken enchilada. I was surprised that the taco had a crisped tortilla shell. The meat wasn’t particularly flavorful but it was fine after I added some of the salsa that had come with the complimentary chips we were served upon seating. The enchilada was also rather bland, but I liked the refried beans and rice.

My guest’s Enchilada Puerto Vallarta was much better. It consisted three seafood wraps –shrimp, fish and crab – with a creamy béchamel-like sauce, which made the plate a study in white.

Since it was also a tequila bar, I felt it really was necessary to sample the house Margarita, made with tequila, orange curacao and orange juice, plus, mysteriously, a “secret recipe mix.” I liked the flavors of the drink – and after watching the bartenders work, I can tell you they do a generous pour.

The fellow who served us was congenial, and the food came out at a brisk pace.

The dining area is a large open space, and with a full house it can thrum. But I suppose that’s why so many people enjoy it.