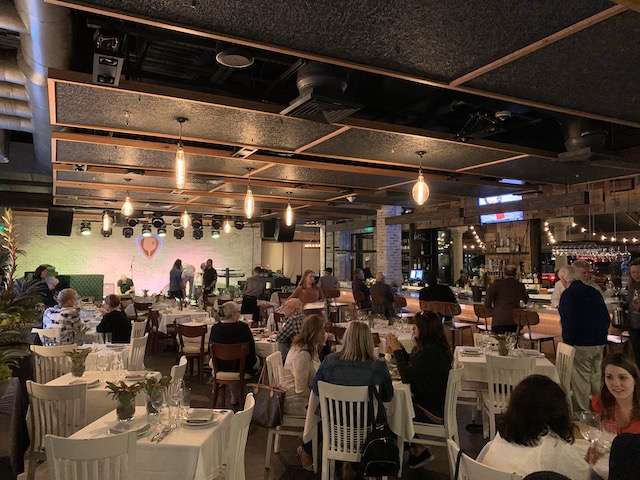 This review is abbreviated for broadcast. Find the review in its entirety by following this link to Scott Joseph’s Orlando Restaurant Guide.

Is anyone accepting wagers on when Dexter’s New Standard will officially drop the first word in its name?

The name, of course, is homage to Dexter’s of Winter Park, one of what was once a quadruple of restaurants.

A little more than a year ago, all of the Dexter’s were sold to different entities. Only Dexter’s of Lake Mary remains, if you don’t count Dexter’s New Standard.

And I don’t. I suppose it made sense initially to keep the Dexter’s name as a connection to its roots, a tribute to the beginnings of what once was a beloved bôite. But the new moniker that was attached when the restaurant was moved to its current home suggests a breakaway from the past – you can’t get any more succinct than New Standard.

But while there are certain echos of a Dexter’s past – popular menu items, though reimagined; a continued dedication to live music; and a renewed commitment to an ambitious wine program – this clearly is a new restaurant.

Eggplant Napoleon is an example of a Dexter’s staple that remains on the New Standard’s menu. But it’s substantially different. Instead of a totally deep-fried stack, it now has one breaded and fried slice of eggplant atop baked slices layered with herbed ricotta cheese and sitting in a puddle of marinara. The contrasting textures and herbaceous flavors were delightful.

The DNS Burger was about as good as the one I had recently at Chumley’s, a New York restaurant so known for its burger that it’s not even listed on the menu – you just ask for it. The DNS featured a thick patty, cooked only slightly beyond the requested medium rare but still oozing with juices.

I also had the Lump Crab Hushpuppies, golden fritters served in a paprika- tinged aioli that could have had a bit more crabmeat – less hush, more puppy.

I doubt anyone will mourn when the first word eventually gets dropped. Dexter’s of Winter Park is gone; long live the New Standard.

And besides, it really isn’t Dexter’s without a Chicken Tortilla Pie on the menu.