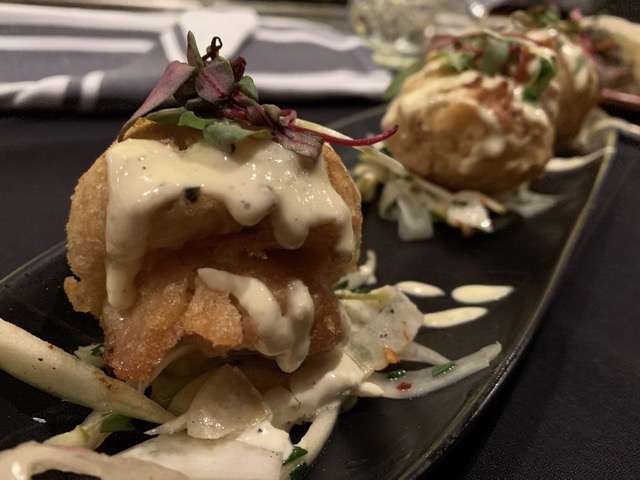 It always seemed like a good idea to me, a full-service restaurant in the culinary desert between downtown and Sodo.

But something feels different about Delaney’s Tavern. I hesitate to use a cliché and call it Cheers like, but it does have that mien, and not just because John Ratzenberger, the actor who played Cliff on the old television series, was spotted sitting on one of its stools recently.

The menu reads like the sort of bill of fare you’d expect in a tavern, but the quality is several levels above that.

The Beef Tenderloin Tartare is a good example. Usually served in components, here the shaved meat is preblended with egg yolk, capers, onion and tinged with a bit of truffle aioli then served on slices of grilled baguette, all the balanced flavors combined in convenient bites.

I’ve had the Blue Crab Beignets on each of my three visits, and each time I marvel at the ethereal lightness of the savory doughnuts, with the sweet meat inside offset with a touch of spicy horseradish.

Diver Scallop, Shrimp + Grits was a favorite entree. Besides adding plump and firm scallops, Delaney’s version of this somewhat tired workhorse is given new life with the use of purple grits. Tasso ham and a cream sauce made with sun-dried tomatoes make it a winner.

Only a flatbread of roasted mushrooms and shallots disappointed. The thin bread grew limp under the burrata and pesto fashioned out of arugula.

There are two separate dining areas: the main bar and lounge and a room with tables in the rear. I find the bar area more alluring, though I wouldn’t want to sit at one of the lounge tables that have chairs without backs. The bar stools are preferable.

If you can get Cliffy to move over.