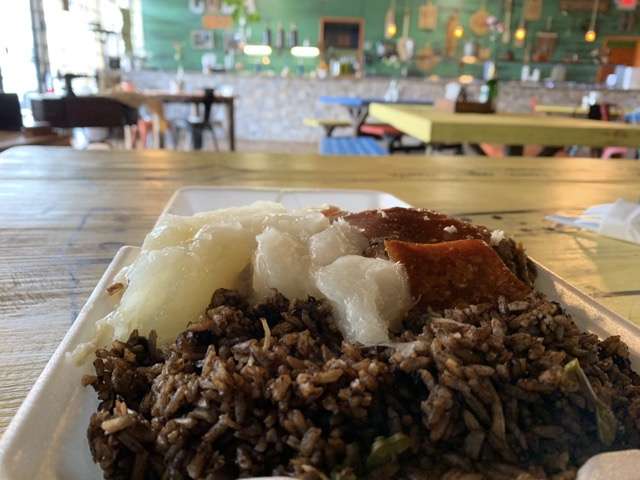 I was motoring along Colonial Drive the other day when I spotted a new restaurant, Cuba 1800’s, so I decided to take a step back in time and have lunch.

Actually, I can’t really see the difference between this place and similar restaurants specializing in Cuban cuisine. But I can tell you I liked the food very much. And the casual picnic-style atmosphere. And especially the way I was welcomed by the staff of Cuba 1800’s.

Cuba 1800’s serves cafeteria style. It isn’t immediately clear, nor is it intuitive, but the line forms not at the end closest to the entrance but at the back of the restaurant.

There are myriad meats, rices, beans and other accouterments to choose among. I told the young woman what items I wanted and she scooped them up into a takeout container. And such huge scoops that I didn’t think the lid would close.

I chose congris, the blend of rice and black beans, with roast pork as my meat. The server was carefully choosing meat that didn’t have skin attached when I told her that the chicharron was fine with me. She looked surprised that I would want the skin, but then smiled and grabbed a pair of scissors. Before she snipped some off she tapped the scissors on the pork skin so I could hear how crisp it was. We both smiled.

My meal, which came with a beverage that I grabbed out of the self-serve cooler, came to $9.90, which has to be some sort of by-the-pound bargain. I was surprised I was able to carry it without assistance to one of the colorful picnic tables that sit under the ceiling paddle fans.

The chicharrones were indeed crisp and chewy, with little bits of fat still attached. The rest of the pork was moist and well seasoned. I liked that the cassava wasn’t too garlicky.

For some reason, Cuba 1800’s is spelled with an apostrophe. It’s not needed, but with food this good, I can’t fault them for being a bit possessive.