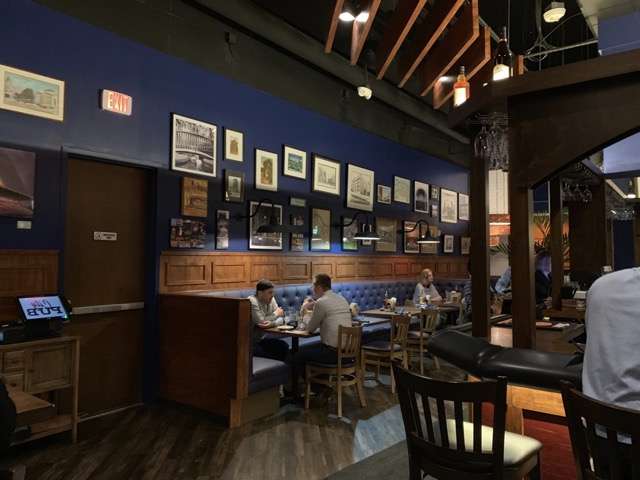 City Pub is the new restaurant and bar that replaced North Quarter Tavern. The bones of the place are the same, with the central bar and surrounding dining tables. But some decorating touches have been added — royal blue paint, wood wainscoting over a tufted banquette along the back wall — that give it a traditional pub mien.

And the food is still above average, though not as creative as when NQT first opened.

Yet there’s something about City Pub that just doesn’t seem to congeal. It lacks focus, and the staff don’t seem to have guidance to help them in finding the center. On both of my visits, I felt like everyone there would rather be somewhere else.

The menu is described on the restaurant’s website as featuring “classic and remastered pub favorites.” Indeed, you’ll find such things as fish and chips, cottage pie and the requisite burger, though I can’t say what has been remastered about any of the foods I tasted.

And I don’t know what made the appetizer called Dirty Chips dirty, and I certainly can’t tell you why a handful of chips should cost $6.95.

Or why three wedges of grilled avocado served with iceberg lettuce would command $8.95.

That Cottage Pie was a more reasonable — or at least less shocking — $15.95. It was an unremastered collection of tenderloin chunks with carrots and peas in a gravied sauce under a cap of mashed potatoes with melted cheddar. It was well seasoned and filling.

I liked the Pub Burger, though the patty seemed a bit smallish. But the unusually thick rashers of applewood smoked bacon gave it a nice smoky note, and the brioche bun was fresh.

The owners have other businesses that are primarily bars.

That’s a completely different animal, and the customers expect something different, in service and in attitude, from a restaurant than they do from a cocktail lounge. I suspect management will eventually figure that out.