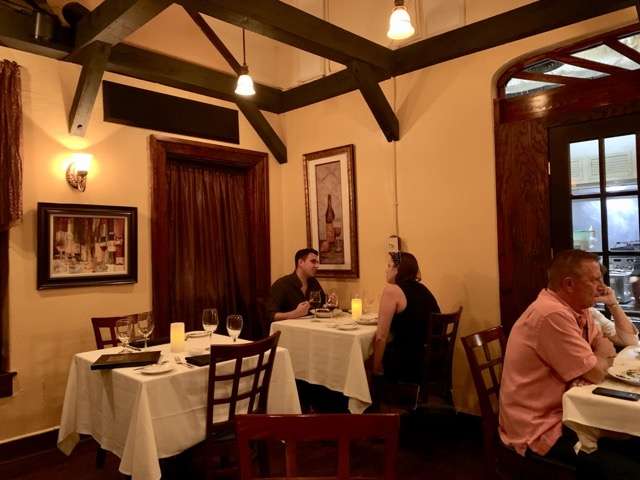 I just spent a perfectly lovely evening at an old favorite I hadn’t visited in too long a time, Chef’s Table at the Edgewater.

Owners Kevin and Laurie Tarter were ahead of the Winter Garden renaissance when they opened their intimate restaurant in the historic Edgewater Hotel there in May of 2008. Eleven years later, the West Orange County hamlet is a hopping with good restaurants and evening entertainment. And the Tarters have expanded their domain with the addition of the Tasting Room, which occupies a space in front of the Chef’s Table’s dining room, and, earlier this year, the acquisition of the Attic Door.

But the Chef’s Table remains the jewel, a leisurely evening of three courses, with wine pairings if you like, served by a friendly and attentive staff.

As I said in my first review of the restaurant, it’s hard to say whether the dining room is in the kitchen or the kitchen is in the dining room. There is a bit of delineation between the two spaces, but the kitchen is definitely right there. The experience here is different from the conventional notion of a chef’s table, which is usually just one table with one seating per evening and everyone is served the same degustation menu.

Here, there are several tables, though not so many as to lose the intimate feel. And there may be a turn or two during the evening.

Instead of a table d’hote or degustation menu, as you might find at a conventional chef’s table, the menu here is a prix fixe three-course dinner with multiple options for $58.90, a ridiculously low price considering the quality. Wine pairings with each course are available for $27.90.

There is one supplement fee of $8 for the Pan-seared Foie Gras first course option, which my companion, a foie gras aficionado, was happy to pay.

And I was happy to try it, a lovely lobe, deftly seared, served on a tuffet of toasted brioche, drizzled with a reduction of maple syrup aged in bourbon barrels. A blueberry lavender gastrique dotted the plate, unneeded to add enjoyment to the burst of flavors.

I had wavered between ordering the torte and the Seared Scallops, but we were served the latter as an amuse bouche. It featured a large scallops seared just so, served in a miso glaze with sweet potato puree and a charred leek. So, win-win.

The Smoked Pork Chop was my choice for the main course as much for the accompanying white bean cassoulet as for the meat. But the meat was impressive, a massive double chop, impressively tender, and topped with a rasher of crisped pork belly. So, pork on pork. With the cassoulet and candied collards accompanying, it was a delightful feast.

My companion chose the Pan-seared Spiced Duck Breast, which had medallions of the medium-rare meat served atop a hash fashioned out of root vegetables. A port wine reductions sauce graced the duck.

For dessert, I think my Caramel Cheesecake was the winner over my friend’s Sweet Potato Bread Pudding, though both were good. The cheesecake, though, had a bit of saltiness that was a perfect counterpoint to the sweet caramel.

The bread pudding was served with molasses ice cream atop a bit of “soil” made with bourbon caramel graham crackers.

Service was professional and on point all evening. And it says a lot about the place that several staff members have been with the restaurant for years. There is a bit more activity in the kitchen since the last time I dined here because it now also services the Tasting Room. But it’s a low-level buzz and the room still maintains its intimate feel. (A few nearby tables held people celebrating anniversaries, so it’s a good romantic atmosphere, as well.)

One of the more impressive things about Chef’s Table is its constant creativity. Each dish has its own sauce or accompanying accouterments. It’s also what makes choosing so difficult.

Winter Garden has grown since the Tarters first opened, and there are many wonderful dining options. But the Chef’s Table at the Edgewater will continue to be my recommendation for a top-notch fine dining experience.