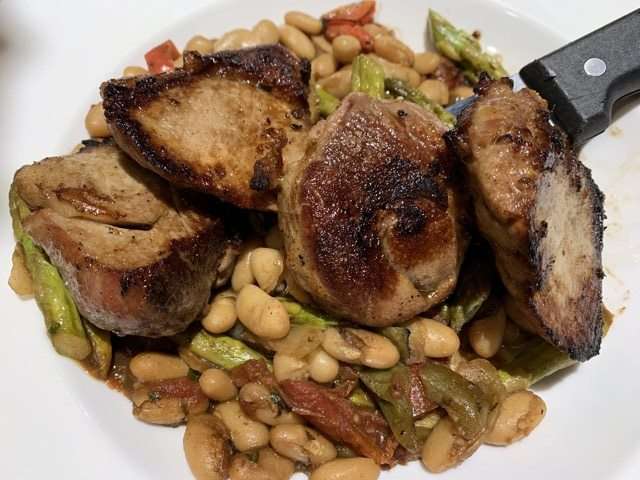 Things looked promising at the beginning of my visit to Burntwood Tavern, the Ohio based mini chain that recently opened in Orlando.

My dinner companion and I started with an appetizer of Stuffed Jalapeños and were impressed with the quality. The plump peppers, deep-fried in summer-weight jackets, were stuffed with smoky cheddar cheese and pimentos that oozed out when we bit into them. They had a delightful spicy kick.

Unfortunately, everything that followed did not have the same quality.

Burntwood was featuring a soft shell crab menu when I visited, and from that list my companion chose the Cajun Soft Shell Crabs. Any flavor the crab itself might have offered was overwhelmed by the salty bay seasonings that coated the shellfish. Soft shell crab is difficult to pull off so I give the restaurant props for attempting something with a high degree of difficulty, but points removed for the dismount.

My entree, the Bourbon Lacquered Pork, didn’t fare much better. The lacquering perhaps aided in getting a good char but offered little in the way of flavor for the pork, which was a bit on the cool side. The meat sat atop a ragout fashioned out of white beans and sections of asparagus, a strange combination.

Our server was quite perky and answered questions deftly. When I called for a reservation, I was referred to as both honey and sweetheart during the short conversation with someone I’ve never met.

Burntwood Tavern is a concept of Chef Art Pour Restaurant Group, which does not refer to a cook named Art Pour. Chef is represented on the menu with a watermark of a knife and pour with one of a jigger. Art, of course, is represented by a…wrench?

There is no listing on the menu for an Orlando location. But there’s one for Grand Oaks, because everyone knows that’s the name of the plaza it’s in. Right?

I suppose those who really want to find it will. For me, it’s too much trouble to go to for good stuffed jalapeños.