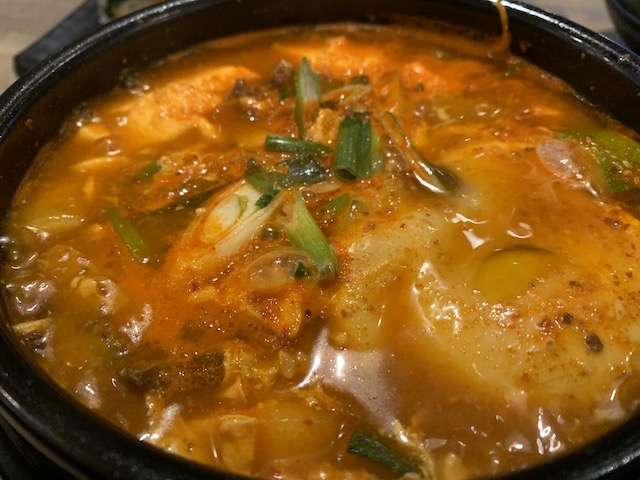 BaBbi BaBbi Korean Kitchen wasn’t exactly what I was expecting it to be. In fact, I’ll admit to being a bit disappointed when I walked into the new eatery at Phillips Crossing and discovered it was a quick-serve operation.

But I soon learned that even though one orders the food at the counter, service is supplied throughout the meal. And even better, the food was quite good.

And there’s a lot of little extras. The first began right after I paid and was told to help myself to one of three soups in black cauldrons on a counter next to the pay stand. I went with the seaweed, and what a lot of seaweed there was in that little bowl. A real taste of the ocean.

And no sooner had I taken a seat in the large, bright dining area than a young woman brought an array of typical Korean side dishes, including a variety of kimchis, Korean coleslaw and pickled daikon.

If I’d known these unexpected treats were included I might not have ordered as much as I did, but I enjoyed it all.

Well, enjoyed might be going too far with the Tteobokki, a relatively modern Korean street food. It features doughy, chewy rice cakes that resemble elongated gnocchi dumplings served in a spicy chili sauce.

My order of Soondubu came to the table all abubble in a black clay pot. The stew had a spicy broth with lots of soft tofu cubes. There might have been more beef in the mix, but I enjoyed all the flavors and the soft, silky texture of the tofu.

The atmosphere is a bit sterile. There’s an open kitchen and four televisions on a back wall that play travelogues and K-pop music videos (though the music from the sound system doesn’t match any of the videos).

But the staff certainly warms the ambiance. As I left, several people thanked me and said goodbye. Babbi Babbi wasn’t what I thought it would be but it turned out to be much more.