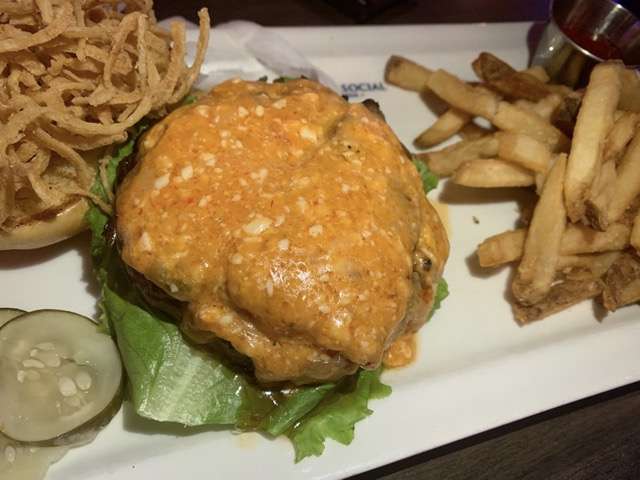 American Social Bar & Kitchen has set up shop in the former Bar Louis space at the Rialto plaza on Sand Lake Road. Amso, as it would like you to call it (though I think Ameri-Sosh has a nicer ring), is out of south Florida where it has two locations, the original, on Las Olas Boulevard in Ft. Lauderdale, and in Miami overlooking the Miami River. There is another location in Tampa.

Amso – why does that make me think of cleaning products? – is a sports bar with a boisterous atmosphere. Think loud. No, louder. It features an “all-American” menu, so of course you’ll find hummus, Ropa Vieja Tacos and Steak Frites. That the Steak Frites is topped with chimichurri only makes it all the more American.

I ordered the steak frites because j’avais très faim and it sounded bueno. It featured a 10-ounce sirloin grilled to medium rare and topped with the piquant sauce of chopped parsley and garlic. It was accompanied by Garlic Parmesan Fries, so called because, well, you can figure that out. The steak was OK, but I think at $22.75 it was a few bucks too much.

And the Amso Signature Burger wasn’t worth $17.75, either, even weighing in at a half pound. It had smoked bacon and crisp frizzled onions and pimento cheese, which, it should be mentioned, doesn’t look very pretty melted on a burger. It came with fries, sans garlic and parmesan because this is America, dammit. The patty was nice and thick and it was a good burger, just not 18 bucks good.

My guest and I started with an appetizer, or Social Bite, if you will, of Cheeto Chickpeas. I mean, how can you not be intrigued by something called Cheeto Chickpeas? It consisted of fried garbanzo beans coated in crushed Cheetos, which are essentially cornmeal, so it makes sense. They were actually pretty tasty and we popped them in our mouths addictively. I’m sure the management loves selling this dish because at $7.50 it’s got to be a fantastically advantageous food cost.

There is a large central bar and most seating is at high top tables. Since you won’t be able to have a conversation with your companion, you can amuse yourself by trying to count all the televisions hanging about.

You expect a sports bar to be noisy and lively, so all of that is just fine as long as you know what you’re getting into. And I kid about the all-American menu with the foreign food. America, after all, is a great melting pot.

But those prices are too South Floridian for these parts. They might be acceptable if the food was extraordinary, but most of what I experienced at Amso was just so-so.