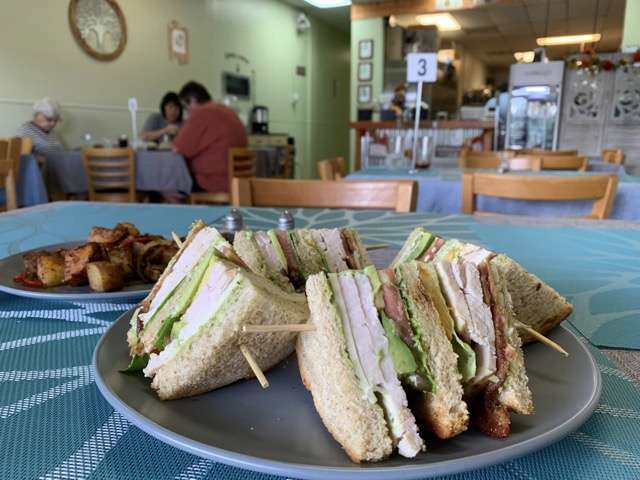 Stopped by a pleasant little breakfast and lunch spot in Casselberry the other day called Alex’s Fresh Kitchen.

The Alex of Alex’s Fresh Kitchen is Alexander Diaz. His restaurant is a small storefront in the same compact group of businesses that also holds Palma Maria Italian restaurant and Aladdin’s Middle Eastern Cuisine.

The menu, like the restaurant, isn’t large but has an even balance of morning and noon items, including pancakes, granola and egg croissant for the former and salads and sandwiches for the latter

Having arrived at noon, I chose the Ultimate Turkey Club, which ultimately turned out to be immense. It featured thick slices of smoked breast meat layered with bacon, white cheddar, tomatoes and avocados plus some delicate butter lettuce on fresh, lightly toasted wheat bread.

Because of its size, it was difficult to fit into one’s mouth. And club sandwiches being what they are – with a third slice of bread in the middle (who came up with that idea, anyway?) – it also wasn’t easy to disassemble. Yet, somehow I managed, and I enjoyed it, especially with the cilantro aioli I had on the side. (Actually, I slathered it on all sides.)

The sandwich came with fries but I was told I could substitute hash browns. I figured that would be like having breakfast and lunch together, so I went with that. The potato chunks were well browned and fried with red bell pepper slices. They were also good with the aioli.

I’ll have to go back to try one of the desserts, which feature mostly gluten-free cakes baked by Diaz’s mother, Deborah McDowell, who also works the front of the restaurant, taking the orders at the counter and delivering them to one of the handful of tables.

The decor has a pleasant farmhouse feel, with tile floors, small wooden plaques with herb figures, and walls the color of cilantro aioli. (That stuff made an impression.)

And Diaz and McDowell were charming and accommodating hosts.