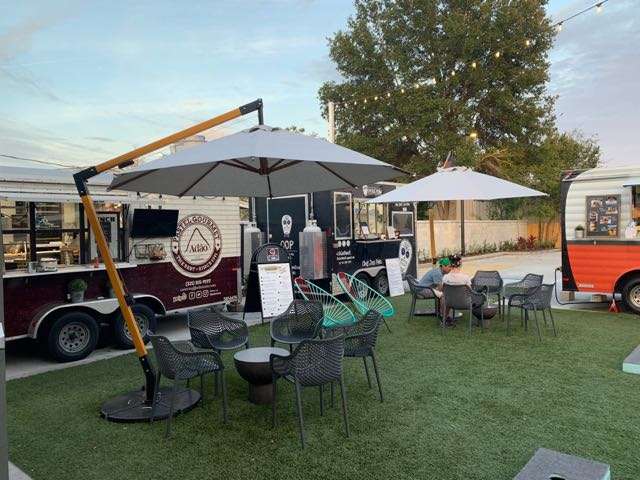 The concept of the permanent food truck rally that is À La Cart brings with it one great advantage over other food truck gatherings. Yes, there is available seating, something that is often nonexistent unless you haul your own lawn chairs. And much of that seating is inside a pavilion, which not only offers shelter from the elements but also has a bar serving an impressive array of craft beers.

But the nicest advantage is that the permanent location allows the trucks to operate on electric power and leave their loud, smelly, gasoline-chugging generators off.

So the artificial turf that serves as a central lawn around which the trucks are circled seems like a little patch of heaven.

Four trucks — trailers, to be more precise — were on hand the evening I visited. That’s not a lot compared to other truck events, but they offered a nice array. And their proximity made it easy to wander around and peruse the menus of each before making a selection.

I decided on some empanadas from Adão, a Brazilian truck, and a Picahna platter from Steak It Easy, also Brazilian. (There was also Mexican and poke options.) While I waited, I visited the pavilion.

The structure is tidy and has plenty of seating at long communal tables. I ordered a Southern Tier imperial IPA to sip while I waited.

I finished my beer (refreshing) just as my food was ready.

Of the three empanadas, I liked the beef and blue cheese filled one the best, although all of them were good and flaky.

The Picahna was grilled to the requested medium rare and sliced into bite-sized bits. I liked that the piece of foil the meat was wrapped in had captured some of the juices. I poured them over the meat when I had replated it.

I like À La Cart. It’s a smart idea, and the Milk District is the perfect location. It’s nice to have a permanent food truck locale and even better to have one where you can sit and sip a cold beer.