Spotlight: Scott Joseph on ‘The Whiskey’ 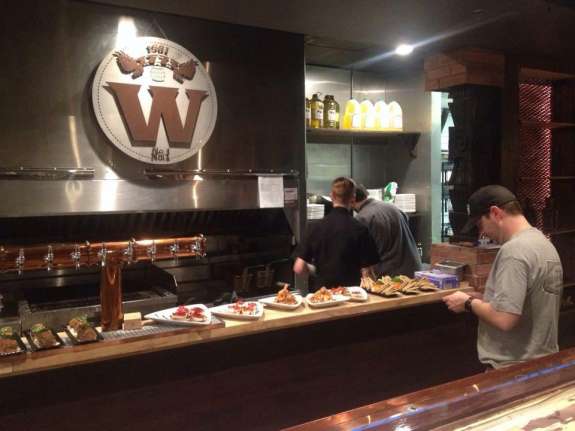 The space that held Cricketers Arms didn’t sit empty too long after that British pub closed. It’s now called The Whiskey, and you’d be forgiven for thinking that any place with such a name is more about the drink than about the food. But based on my recent visit, that isn’t the case at all.

Oh, it’s very serious about the drink part, especially with cocktails featuring the eponymous liquid. There is an interesting craft cocktail menu with some intriguing entries. I chose the one called the Devereaux that was sort of like a French 75 but with bourbon. Maybe a Kentucky 75?

Burgers appear to be the food menu’s focal point, and I homed in on the one named The Whiskey, which in the wrong hands could have been a soggy mess. Instead it was an impressively large patty, draped with melted smoked gouda, stacked with whole rashers of bacon and some onions, plus a sauce of aioli infused with dill. For the burger to earn the Whiskey name, its bacon had a bourbon glaze and the onions were sauteed with whiskey. It was cooked to a perfect medium rare and served on a fresh toasted bun with a bed of spicy arugula.

I sat at the bar — seriously, where else should you sit at a place called The Whiskey? — and enjoyed the friendly service of the bartender. Instead of a backbar with bottles, the other side of the bar station is where the open kitchen is, so you can watch the burgermasters at work.

The rest of the decor is rustic — think lots of rough-hewn wood — and includes the inevitable stacked whiskey barrels flanking a small stage in the back of the space where bands perform. The ambience fits the theme, except for the sticky floors, which, OK, I guess that fits the theme, too.