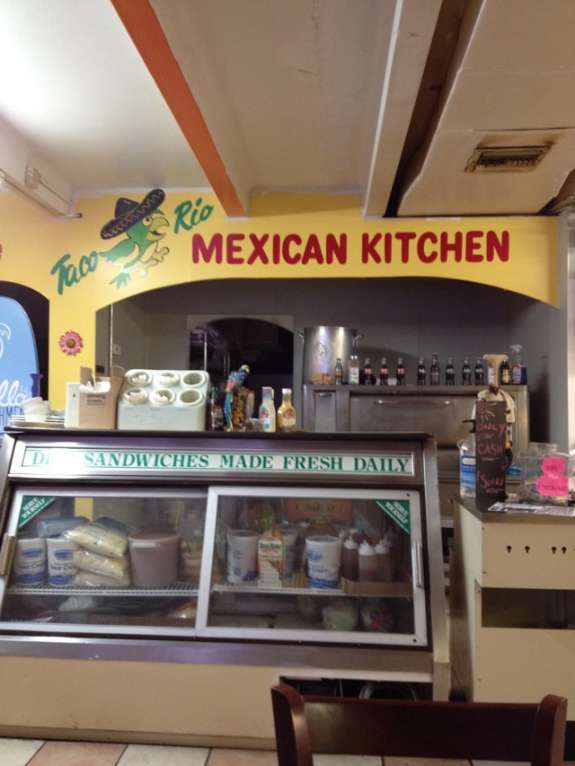 I’ll grant you that from the parking lot outside, the building that houses Taco Rio looks a little scary.

But just go inside and, well, that looks a little scary, too.

Taco Rio occupies one side of a small, neighborhood market in Winter Park’s Olympia Heights. Despite first impressions, and, OK, second impressions too, it is kempt, and the people operating the counter-service eatery were friendly and welcoming, and they made it clear that they appreciated my business. That goes a long way in my book.

I got the two taco option that included, somehow, a third taco, along with sides of refried beans and Spanish rice. The carnitas were served in soft flour tortillas instead of the more traditional corn tortillas you’d find in authentic Mexican restaurants— if corn is an option it wasn’t offered. They were topped with shredded lettuce, chopped tomatoes and sour cream sauce. The meat was well seasoned and had just the right amount of greasy goodness.

I liked the refried beans — the best refried beans have a good bit of fat in them to get this good flavor — but the rice was a bit bland. All I had to do is drizzle some of the red hot sauce, or the salsa verde, for that matter, and voila, or whatever the Spanish equivalent of that would be, instant flavor.

And all of this was filling and delightfully cheap. I’d gladly revisit Taco Rio for another good meal.

Taco Rio is open for lunch and dinner daily but only if you like to have dinner before 7 p.m., which is what time it closes most days.