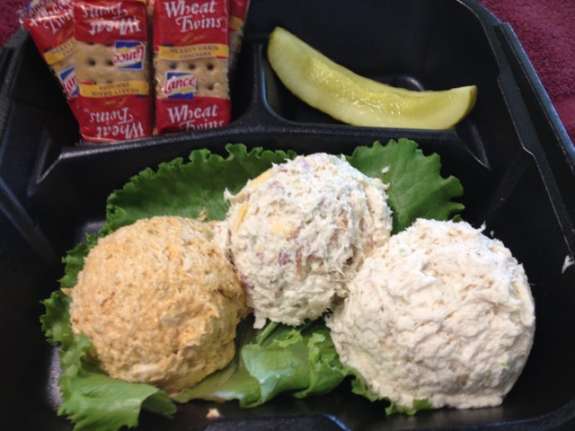 Now comes Chicken Salad Chick, a restaurant that serves a variety of salads chicken. Why do I keep thinking of the old Saturday Night Live skit where Gilda Radner worked in the Scotch-Tape Store at the mall?

Chicken Salad Chick is a franchise that started in Auburn, Ala. by Stacy M. Brown, a self-confessed chicken salad junkie and the chick in question.

So the concept is that there are 15 or so kinds of tape, I mean chicken salad, from the Classic Carol, to versions with hot peppers (Jalapeno Holly), apples and grapes (Fruity Fran) and onions (Dixie Chick, also described on the menu as “our most offensive salad”).

I selected the Chick Trio that included a sampler of three salads of my choice (which is probably why they call it a trio), choosing the Classic Carol, the Buffalo Barclay, which the menu says is the one to get if you’re craving wings, and the Sassy Scotty, just because I liked the sound and the theory of it.

I sort of thought the selections would be served as sandwiches, but instead they were presented as scoops on top of a lettuce leaf that clearly was not meant to be confused as part of the salad and some crackers for scooping.

They were all just fine, though I think I might have been happier with the Jalapeno Holly, maybe instead of the Buffalo Barclay (by the way, if you’re craving wings, go find yourself some wings).

The Scotty was sassed up with ranch dressing, bacon and cheddar cheese. I’ve seen sassier. Heck, I’ve been sassier.