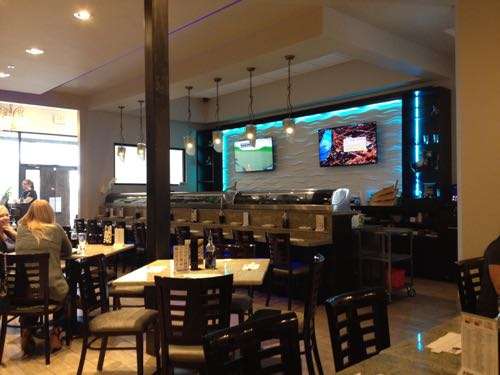 Ari, a sushi and Japanese restaurant, has opened in the Gateway Village just north of Orlando International Airport. Technically, this is a second location for a restaurant in Celebration. But this new Ari has added teppanyaki cooking to its repertoire. That’s the style of cooking where the guests sit around large griddles while the chefs make a lot of really unnecessary banging and clanging sounds with their spatulas, knives and even the salt and pepper shakers. Eventually, a shrimp tail is going to get tossed somewhere it has no business being. I’ve never been a fan.

So when I arrived at the new Ari location ahead of my lunch guest and the greeter asked me if I wanted the teppanyaki seating, I perhaps answered “No” a bit too emphatically. I hope I didn’t frighten her.

Instead, I was shown to a table in the back of the main dining room where the sushi chefs were working behind a fairly dark counter. There was no acknowledgement from the chefs when I walked into the restaurant and when I was led past the counter.

My guest and I ordered a couple of rolls and one of the lunchtime bento boxes so we could sample some of the kitchen foods. Neither was especially noteworthy.

We ordered the soft shell crab roll and the Ultimate Spicy Tuna Roll. I suppose the word “ultimate” is meant to modify the tuna — it featured tuna inside and outside. It certainly couldn’t have been meant to say that it would be ultimately spicy, because it wasn’t in the least.

The soft shell crab tasted as though it had been breaded and fried in advance — it was lifeless and surprisingly bland.

Our bento box was built around the pork katsu, a breaded cutlet cut into strips. It came with a small salad with ginger dressing (delicious), gyoza (hard, flavorless dumplings), a mound of white rice, and four pieces of a California roll, one of the most uncreative and least appealing sushi offerings. We might have well have been popping rice cakes in our mouths.

Service was detached and uncaring. Seemed like most of the staff would have preferred to be someplace else.

Maybe things are better in the teppanyaki room. At least there might be some happy shrimp-tail tossing.