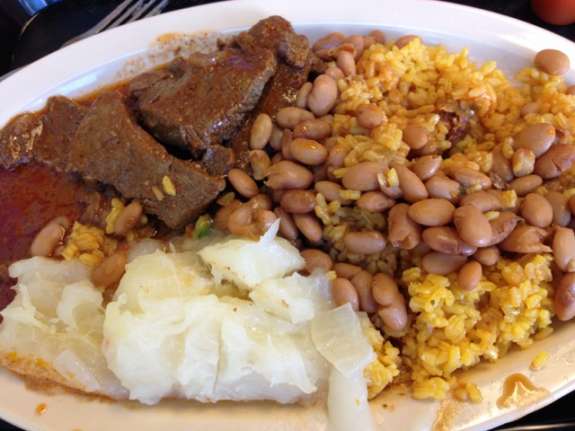 A recent article in the New York Times says that central Florida is the destination for an influx of Puerto Rican transplants.

If that means that we’ll see more restaurants like Sabor del Caribe, I say “Welcome!”

Sabor del Caribe is a small storefront place in a strip mall in extreme East Orlando just around the corner from the city dump. That’s the sort of proximity that restaurant critics take note of just in case the food isn’t very good. But if what I sampled at SdC is any indication, the only things that will be going into the landfill will be the extra takeout containers the guests will need for the leftovers.

I knew I was going to like this place the moment I walked in and was warmly greeted by a smiling fellow behind the counter. Why is it so difficult for so many restaurant staffers to express a sincere welcome to the people who have chosen to do business with them?

There is a selection of prepared dishes — pork, chicken, stews — in steam table trays behind the glass counter. You simply tell one of the nice folks which of the meats you prefer and whether you want white or yellow rice, then select two side dishes and stand back while the staffer loads up a plate.

And I mean load. I chose the beef steak, which was a special of the day, with yellow rice, red beans and yuca. Because I had indicated that I would be eating in the bright, tidy dining room, my food was served on a nondisposable plastic plate with actual flatware. But before I left the counter after paying the paltry sum for the food — about 10 bucks — I warned the young man that I would definitely need a takeout container.

However, the food was so good that I put a pretty big dent in the portion before leaving. The meat was stewed in a tomatoey sauce that was appreciated with the mound of yellow rice.

I did indeed request a takeout container (needed only the small one at that point) and had enough to enjoy for another meal.