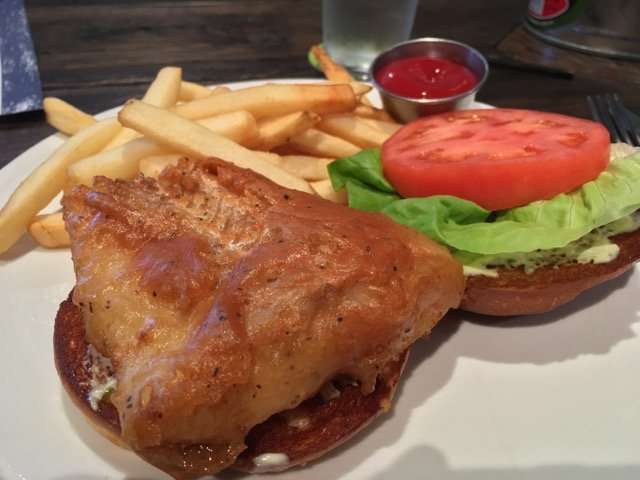 The servers at Reel Fish Coastal Kitchen + Bar, the new restaurant in the old Ravenous Pig space, have apparently been instructed to explain to new guests that it is “a contemporary version of a classic fish camp,” but they’ve not been told how to respond when someone asks, “What does that mean?”

So I can only assume that it means taking tastefully casual decor of the previous tenant, gluing some weathered planks to some walls and stenciling the words Fish Camp on a brick wall.

But fish? Yes, there is fish.

But here, too, the menu, which is under the direction of Michael Zajac and Michael Huffler, isn’t so much a reflection of fish camp cuisine as it is of simply a nice selection of seafood offerings.

The Ale-battered Fried Fish Sandwich, served with a side of fries, was more like a classic fish and chips on a bun. (I don’t think they have fish camps in Britain.) The cod was nice and flaky and the batter crispy and fried just right. It was served on a well-toasted bun with a leaf of lettuce, a slathering of tartar sauce, and a thick slice of tomato.

On another visit my companion and I started with House-smoked Fish Dip, a lovely bowl of lightly dressed fish served with packets of Lance Saltines (now there’s fish camp touch). I don’t know why it was thought that blending in matchsticks of green apples would make the dish better. I just found them annoying as I tried to spread the dip on a cracker.

For my entree I chose the Broiled Seafood Platter because it’s a classic fish camp type of offering and I wanted to see what a contemporary version would look and taste like. But nothing was done to modernize it or elevate it from its overall mundanity. The cod fillet and scallops had a dusting of buttery bread crumbs and both were just fine. The shrimp were just OK. The kitchen prep team might want to try a little harder to remove the shrimp’s sand vein. (Just to be clear: It’s not a vein and that’s not sand.)

My dinner guest chose the Amberjack, one of the specials of the day. A lovely piece of fish with a bit of a barbecue-like glaze, served on a corn and squash succotash and topped with crisp rings of fried onions.

I like the idea of “a contemporary version of a classic fish camp.” I’d love to see what that looks like. I’m pretty sure it will look like something more than any other seafood restaurant, even a good one like Reel Fish.