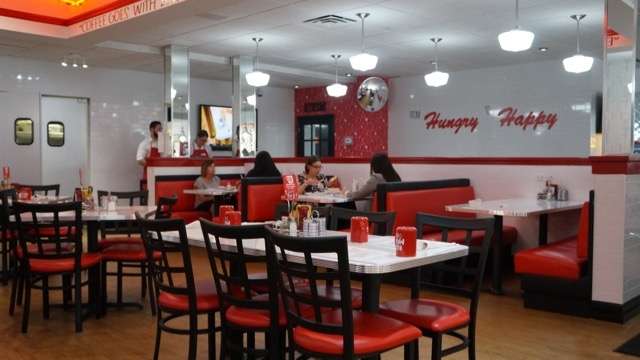 Red Mug Diner brings an old timey style diner to downtown Orlando. It serves basic hash house type items as well as more chef styled entrees in a polished tile and Formica countered decor. And it is open 24 hours a day every day of the week (though just between you and me, don’t expect that to last very long; I doubt that there’s enough business to sustain that model).

I met a friend recently for both breakfast and lunch — at the same time. From the breakfast items, we chose the Shakshuka, a seldom seen egg and tomatoes dish traditional on Jewish and Middle Eastern menus. It’s base is a spicy stew of tomatoes with onions and plenty of chili pepper. The eggs — three of them here — are poached in the sauce. The spicing was wonderful and multi layered. It wasn’t just spicy for spicy’s sake, it was an integrated heat. And the yolks running into the tomato stew made a terrific blend.

The Open-faced Roast Beef Sandwich featured two thick slices of brioche bread with several slices of beef layered in ribbons over the toast. The meat was topped with melted cheddar cheese, a ladle’s worth of brown gravy, and a capper of frizzled battered fried onions. It came with lumpy mashed potatoes, a perfect diner dinner.

And I like the details that have gone into the design.

Red Mug Diner will likely be popular with the after hours crowd from the myriad bars, but it should also attract downtowners looking for a casual lunch.