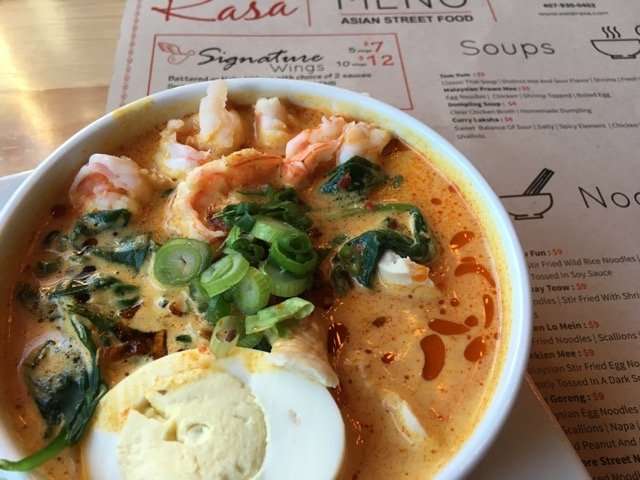 Rasa’s owner, Sunny Corda, said he spent two months in Malaysia researching some of the dishes.

It was worth the time to come up with a dish like the Curry Laksha. It was a bounty in a small bowl with a multilayered broth of chicken and coconut milk, tinged with sweetness and spice, the latter provided by myriad chilies. A hard-boiled egg floated on one side while several shrimp clustered on another with bits of chicken here and there. And submerged beneath it all was a stack of delicate vermicelli noodles. The the spoon in my left hand and chopsticks in my right, I found myself unable to stop. Delicious.

Kimchi Fried Rice was another favorite, the spicy fermented bok choy mixed in with rice, chicken and egg.

Singapore Street Noodles had long strands of thick, round noodles tossed with curry spicing with chopped bits of chicken and shrimp, decorated with scallions and accompanied with a lime wedge to squeeze at will to add a touch of acidity.

Rasa occupies the space that was previously Le Rouge, and some rougey notes still remain especially in lighting accents under the bar counter and the shelves of the back bar.

The servers of the new restaurant don’t seem quite comfortable in their roles yet. Dishes, which come from the kitchen at a steady pace, served when ready in the style of a tapas restaurant, were placed unceremoniously on the table, unannounced. many of the dishes served will be new to some guests. Rasa’s servers have an opportunity to inform, and to show a little pride in what they’re serving.