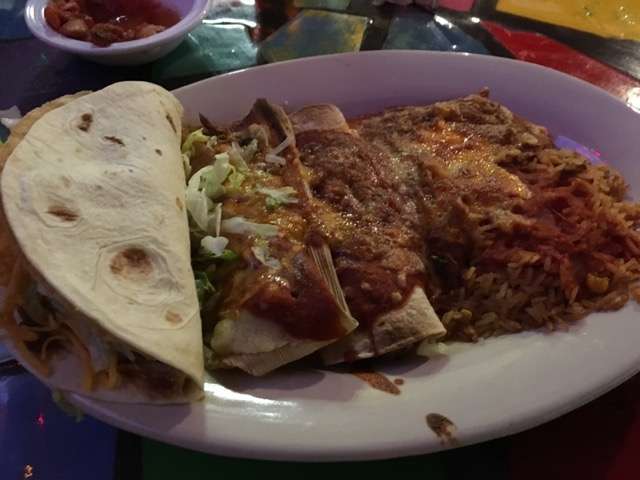 I think I might know why it took so long for PR’s Taco Palace to open its College Park location.

You may recall — and you’ll be forgiven if you don’t — it was first announced that the popular Winter Park dive would take over the former Taste restaurant space on West Smith Street in January. Of 2014. That’s a long time even when you take into consideration Orlando’s arcane permitting and inspection procedures.

But apparently they’ve spent the time making the place look old, as in well worn and broken in. The paint seems to have faded a bit, the walls are covered with handwritten graffiti. And the furniture has been over abused, which in the case of the booth I was sitting in meant that the seat back was broken so that every time the woman sitting behind me shifted her weight I was thrown forward face first into the basket of complimentary tortilla chips (nice chips, though they could use a little salt).

To be honest, I was never much a fan of the original PR’s. Years ago, after moving here from the southwest, I coined a term for this type of food: Flori-Mex.

I don’t know if I’ve softened, the Tex-Mexers have gotten better, or it just isn’t that important anymore. I’m going to try not to let it bother me, whatever it is.

And the truth is, I rather enjoyed the food I had recently at the newest PR’s. It included a combination platter of something called a double stuffed taco, and enchilada and a tamale with refried beans and Mexican rice.

The taco was not exactly what the name implied. It featured a hard taco shell inside a soft flour tortilla, with refried beans slathered in between the two and the meat of choice (shredded beef for me) stuffed inside with shredded lettuce and yellow cheese on top. Perfect Flori-Mex, and just the sort of device any self-respecting restaurant critic should disdain. (I, quite guiltily, liked it. The hard shell gave it a textural crunch that was quite pleasant.)

The enchilada was acceptable; the tamale merely OK. I liked the refried beans but the rice was too dry and had a strange sort of sweetness in its spicing. (Really, Mexican rice shouldn’t be that difficult.)

The space has been opened up and the bar is front and center. Garage-type doors open to the world of College Park where there are picnic tables on the sidewalk.

I had a bet that this PR’s would never open — and it certainly looked as though I was going to win it. Glad to lose this one.