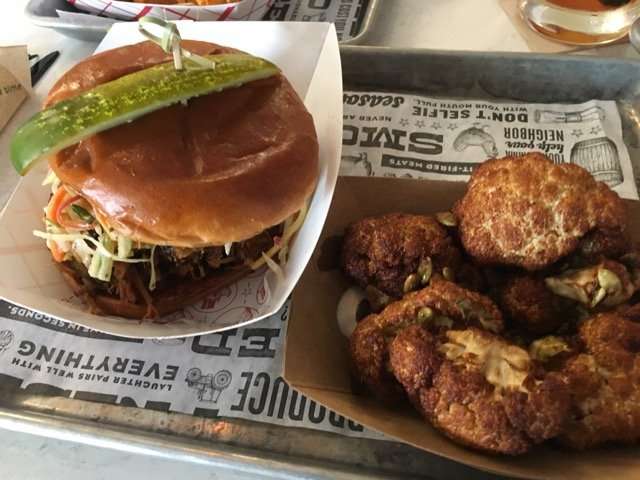 The Polite Pig has opened at Disney Springs, bringing a much-needed local voice to the assembled chorus of celebrity-owned restaurants and national chains.

The Polite Pig, of course, is the latest from the Swine Empire ruled over by pigtators James and Julie Petrakis, whose other restaurants include the Ravenous Pig and Cask & Larder.

The Polite Pig is something new from the Petrakises, not so much in the type of food as in the delivery. The restaurant is set up primarily as a quick-serve operation. Customers queue up and order their food at a counter, pay, then take an electronic tracking device to a table. A server will track you down to bring the food to you when ready and also offer to help with any additional ordering or condiment needs.

There’s little on the menu that is extraordinary or unexpected. The only thing out of the ordinary is the line of cocktails offered. Not the cocktails themselves — rum & coke, gin & tonic, old fashioned and such — but their delivery, tapped from spigots when ordered at the counter.

My old fashioned was a bit watery, I felt, though my companion reported the vodka lemonade was just fine.

The menu is mainly barbecue and mostly sandwiches. I had the Southern Pig, pulled pork with apple slaw, mustard and mayo. The meat was sufficiently smoky and moist enough. I preferred eating it separate from the comparatively mundane bun.

My friend had the Fried Chicken sandwich, which I found a bit dry, though I enjoyed the pimento cheese and pickles that were included.

I had hoped the BBQ Cauliflower side dish would be as good as what Cask & Larder serves at its airside restaurant at Orlando International Airport, but it didn’t quite reach that level. The Charred Broccoli, however, with herbed buttermilk and a sprinkling of granola, was terrific.

Almost as good as the BBQ Cracklins appetizer, a mound of crispy pig skins with a hint of spiced vinegar that negated the need for any of the dipping sauces from the barbecue bar.

I’m not at all sure why the Hop Salt Pretzel was included as a starter. It seemed more suited for a Bavarian restaurant than one with a Southern theme.

All staff were eager and courteous, polite if you prefer.

Polite Pig, still new, has some issues to work through, not the least of which is the dispensing cocktails. But the porcine pedigree is a strong one, so all should fall into place in time.