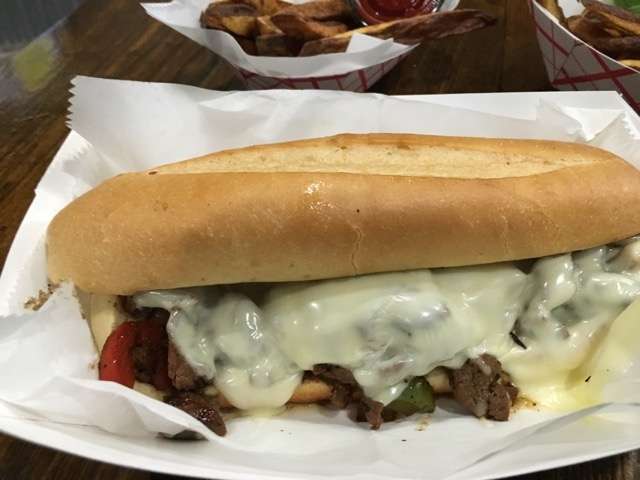 I finally made it out to Plant Street Market in Winter Garden. I like the whole concept. It’s a terrific space, and judging from the crowd on a Thursday night, a very popular hangout.

Especially around the Crooked Can Brewery, which has one of the most serious sets of brewing tanks I’ve seen outside of Milwaukee. And they turn out some good and cold beers, too.

CCB is at one end of market, which is all open under one large enclosed space. You’re free to wander through the market with a beer — I recommend the kolsch — and order food from one of the other vendors.

My friend and I went a little overboard with the ordering. We got a Boss pizza, with pepperoni, sausage and kalamata olives, from Michael’s Ali Coal Fired Pizza. And we also ordered a Philly Cheesesteak and a burger with fries from Five Thymes Five.

The cheesesteak was the better of the two sandwiches, mainly because it had big chunks of meat that you could actually get a chew on. Good sautéed onions and peppers and lots of cheese to cover the steak. Would have liked to have seen it all in a better roll, but overall it was good.

I don’t think it was quite worth $14, but the burger wasn’t worth $13, either. It might have been if it had been cooked to the requested temperature, but it went too far beyond that and the result a dry eight ounces of grass fed beef patty.

The pizza was good. I like the dark spots a crust takes on in a coal-fired oven. It was nice and crispy, and the toppings were ample enough and well distributed.

I was glad to see the David Ramirez Chocolates booth, but unfortunately they had closed for the evening before I arrived. Actually, it’s probably just as well because I wouldn’t have been able to stop myself from overdoing it with the chocolates.