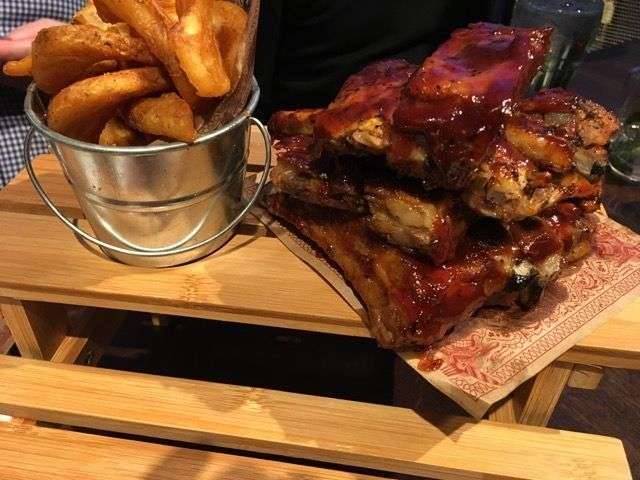 I didn’t think it was possible but Robert Earl has outdone himself.

The newly rebranded Planet Hollywood Observatory is a theme restaurant of Cecile B. DeMille proportions. The massive dining venue is on three open levels — think orchestra, mezzanine and balcony — and is dominated by a huge, towering curved screen where videos and other images are projected from various angles. It’s a little bit like dining in an IMAX theater.

The observatory designation is a brilliant one because an observatory and Hollywood have the same obsession: stars.

Foodwise, this is still Planet Hollywood. One comes here for the spectacle, the memorabilia and the atmospherics, one doesn’t come here for fine dining.

Even with — or especially because of? — a section of the revised menu featuring selections by Food Network star Guy Fieri. But you weren’t expecting fine dining from him either, were you?

Fieri’s contributions are mainly in the form of sandwiches and burgers, many that bear names with references to Fierisms, such as the Mayor of Flavortown Burger, which includes grilled pastrami, swiss cheese, coleslaw and something called Donkey Sauce, which he assures us does not contain actual donkey. It was certainly impressive in size, but the mayor might want to step up his game before the next election.

Oh, here’s bit of nostalgia: Remember when Hard Rock Cafe and Planet Hollywood first came to town and people were outraged at the audacity of charging $8.95 for a burger? This one costs $18.99.

I was more impressed with the Championship Pulled Pork sandwich, and the barbecued ribs, which were presented atop a miniature picnic table and stacked like so many Lincoln Logs.

L.A. Lasagna is the sort of entree that will either delight or horrify you. Instead of a layered, baked affair, this lasagna is made with pasta tubes stuffed with a Bolognese-style meat sauce and then deep fried. Yes, I share your horror, and I’m even more troubled that I liked the way it tasted.

For sheer showmanship, the High Roller Platter of appetizers delivers. It features five items from the list of starters served on a huge metal structure in the shape of a Ferris wheel. Mr. DeMille would approve.