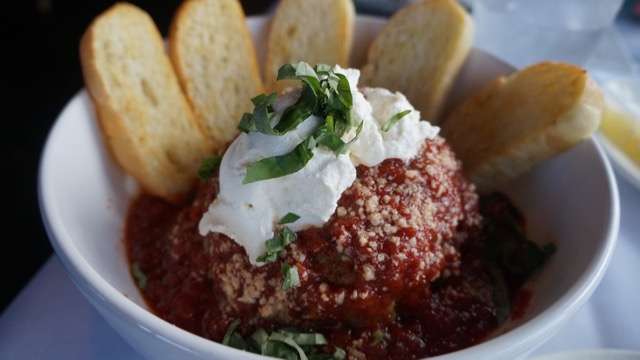 It could be peppier.

The Peppy Bistro has taken over the College Park space that for several years was the Mexican restaurant Paxia. And just to clear things up right away, the name does not connote an emotion but rather the name of the owner, Jerry Peppy.

It wants to be known as a fusion restaurant but we’ve discussed this before and I won’t go into it again. Suffice to say that it has Italian, Mediterranean and American dishes with a fajita thrown in for good measure and none of it fused.

Things started well with an appetizer of fried Calamari. The breading was light and crisped and the squid rings and squidlets were mostly tender.

The Peppy Meatball appetizer is described on the menu as “giant,” but that doesn’t do justice to the size. It was less of a meatball than it was a full-sized meatloaf rounded a bit to resemble a marinara-covered bocce ball. It was a good meatball, as long as you didn’t try to stuff the whole thing in your mouth..

Things fell apart a bit with the entrees. I ordered the Paella and what I was served certainly resembled the classic Spanish rice dish. And there were representations of mussels, clams, shrimp, pimento and sausage in the saffron colored rice. But there was no integration of flavors such as you get with a classic paella, with all of the ingredients cooking together over time. It was as if all of the seafoods and rice components had been cooked separately and tossed together when ordered.

Similarly, the Pappardelle alla Vodka dish that came with grilled chicken. The thick ribbons of pasta were nicely blended with the delicately flavored sauce. But the grilled chicken was simply sliced and placed atop the noodles. Not much creativity there.

I liked our server. She was pleasant and good natured and answered questions easily.

The restaurant is split into a dining side and a bar side. I wish I had dined on the bar side. It was a lot peppier there.