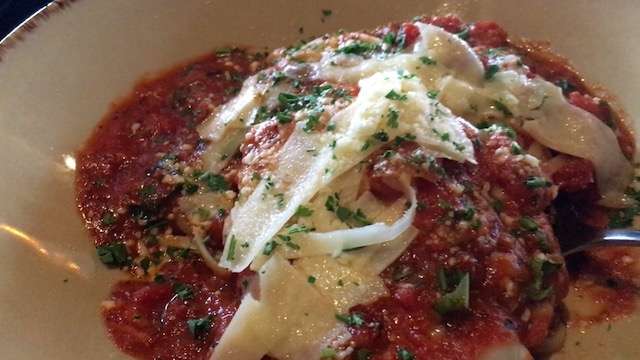 Quietly, Pannullo’s Italian Restaurant is also celebrating its silver anniversary at its Park Avenue address. It’s not the oldest along the avenue but its 25-year achievement is worth noting.

Also worth noting: It may have been 25 years since I last dined there, or pretty close. I’m not entirely sure why that is, but knowing of the anniversary and needing a place to meet a friend for lunch, I decided to stop in.

Little seems to have changed, or at least as far as I can remember. Our meal had ups and downs. Actually, just one down. The Pasta e Fagioli soup was a disappointment, but since it’s a soup that is open to vast variation, I can’t really fault it for its composition, but I can say that the bits of pasta were mushy and there were too few fagioli. Or is it fagiolis? Fagiloe? Oh, heck, it needed more beans.

But everything else we sampled was really quite pleasant.

I especially liked the Meatballs appetizers, two all-beef orbs, dense and well seasoned, served in a pulpy puddle of tomato sauce with a bit of mozzarella scattered about.

For my entree I ordered the Chicken Coppertino, which featured a couple of breasts, floured and sauteed in olive oil, topped with prosciutto, mozzarella, provolone and a bit of ricotta for fun, doused in a tasty marinara sauce and served over linguine.

It was difficult to tell my Coppertino apart from my friend’s Lasagna Roll. And do be careful if you order the Lasagna Roll. Despite the name, it is not something to pick up and eat with your hands, not unless you have your dry cleaner on retainer. There was plenty of meat in it, blended — or rolled, I presume — with the ricotta and red sauce, all beneath a layer of melted mozzarella. I liked my chicken dish, but I liked the lasagna a little better.

I don’t know why Pannullo’s hasn’t come to mind more often over the years when I’ve thought about restaurants on Park Avenue. But I’m glad it came to mind this time, and I congratulate owners Richard Pannullo and Michael Schwartz for their milestone.