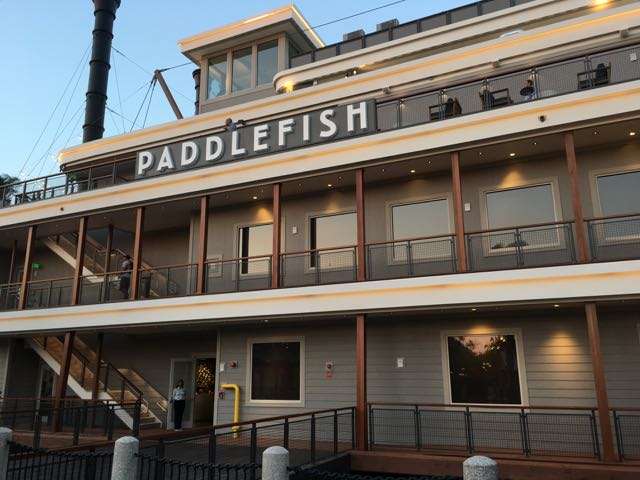 Paddlefish is the re-imagined Fulton’s Crab House (maiden name: Empress Lily), on the non-floating structure made to resemble a vintage paddlewheel river boat.

It’s less vintage-y with the recent renovation, which gave it a modern look, both inside and out (though the frozen-in-place paddles remain).

This is a huge facility, but it features several smaller dining rooms that keep it from feeling like a large main feeding room on a cruise ship.

My guest and I were intrigued by the Crab Fries appetizer and so got an order to share. It was sort of a seafood version of poutine that featured a stack for fries topped with lump crab meat and Louie dressing. Unfortunately, the fries were a bit dry, and beyond that, the Louie dressing was not spiced enough and there wasn’t enough of it. If you’re going to do a dish like this, I say go all-out gloppy.

But then the chef brought out a complimentary appetizer of “Bacon & Egg,” perhaps his way of saying, “You chose poorly.” The bacon was braised pork belly and the egg was, well, an egg, but one that had been soft-cooked for five minutes, peeled and rolled in panko crumbs. Split open, the egg oozed its yellow goodness onto the pork belly for an all-day breakfast treat. Choose wisely, order this for your starter.

Then get the Black Cod en Papillote. Opened table side, the parchment paper held moist chunks of flaky cod with spaghetti squash, shiitake mushrooms and uni butter. Fish rarely gets better than this.

My Midwestern roots caused me to gravitate to the Catfish, dusted here with blue cornmeal and served with a crisply fresh succotash with cubes of bacon. Of course, the catfish of my days growing up next to the Mississippi River was always served with heaps of tartar sauce. Here the sauce was creole mustard, but not nearly enough of it. (It’s taken a long time to realize that catfish requires a lot of sauce.)

Still, Paddlefish is a good addition to the Disney Springs coterie of restaurants.