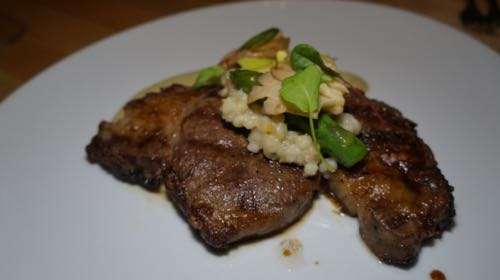 Osprey Tavern is a new and splashy addition to Baldwin Park, an area that’s had trouble supporting good restaurants.

Let me just say right off that I liked Osprey Tavern overall, though, as is the case with most just-opened restaurants, some tweaks and adjustments are needed. But I find the atmosphere lively and fun, the service more than serviceable, and the menu, limited as it is, off to a good start.

Much of the food coming from the open kitchen that shares dominant space in the room with the central bar is prettily presented. The heirloom tomato salad, for one. The firm wedges of multicolored tomatoes were interspersed with deep red beets in a puddle of burrata cheese and underneath a thin bread crisp decorated with granola, pistachios and micro greens.

I don’t know why chefs feel compelled to pair pork belly with fruit, but it was nice to see Osprey’s Berkshire pork belly with simple grilled Florida peaches, much less cloying than the jams and compotes one usually finds.

Tagliatelle was a fairly simple bowl of the wide noodles tossed with peas and salty bits of pancetta in a sauce of brown butter and Beemster cheese. A buttery crisp sat atop, though who could notice it under the crisp rashers of bacon?

One of the three entrees/plates is a prime Delmonico steak, which at $36 is the most expensive item on the menu by eight bucks. Even though it was a perfectly acceptable steak, I can’t say that I’d order it again. Its presence on the menu is obviously meant to appreciate the person who only orders a steak when dining out, but I’m not sure the bananas and broken vinaigrette or the little dollop of barley on top of the meat will appeal to that base.

The BBQ Poussin was the only truly disappointing entree. The quarter- sized coins of kohlrabi and spears of rapini offered more to chew on than the bony bird.
Baldwin Park has not been successful in holding on to good restaurants. Seito Sushi is an exception. And with the same leadership in place here, maybe Osprey Tavern has a shot.