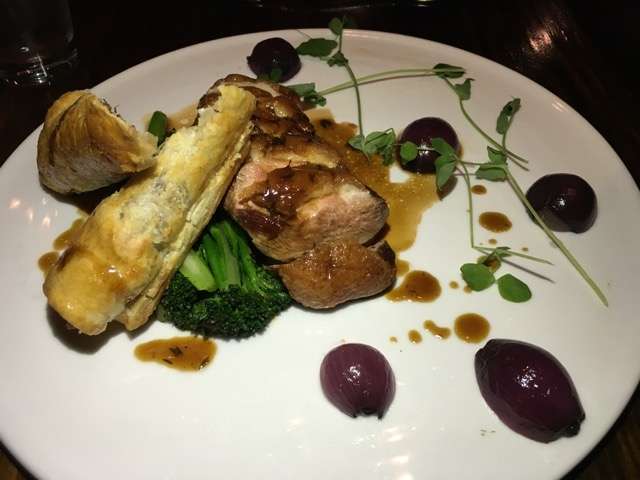 When Nova opened almost a year ago on Orange Avenue in Orlando, I found the decor delightfully adult and sophisticated but the food was disappointing. I also said at the time that I wasn’t ready to give up on Nova because we need more restaurants like this in the downtown sector.

I’m glad I didn’t give up because I returned to Nova recently and found that the menu — a different one from the opening — is now more appropriately varied and with more interesting offerings. Even better: it’s being cooked properly.

My companion and I decided on a starter of the Southern Rockefeller, which reimagined the classic dish. The Hog Island oysters had braised chard instead of spinach and added andouille sausage to give it a drawl. It was just the sort of dish I’d like to see on a menu like this.

For my entree I selected the Scallops and Pork Belly, an unlikely pairing that featured deftly seared George’s Bank sea scallops and a pork belly, well-crisped following a braise. The belly sat atop more of the braised chard while the scallops were on ploofs of caper tinged aioli.

My companion had the Duck Two Ways. One way was listed as a duck confit “pot pie,” the pot pie in quotes because it wasn’t. Instead, it was more like a crispy spring roll, the juicy meat inside a flaky crust. There was also a pan-roasted breast, broccoli rabe and something called vicious duck jus. (I didn’t ask for clarification.)

I remain just as attracted to the ambience as I was before. The white-washed brick, high white banquettes and moody lighting make it comfortable and approachable. I still wish it had a larger bar area.

But I’ll take what I can get. Last year I hoped it would improve the food to match the atmosphere. It’s finally there.