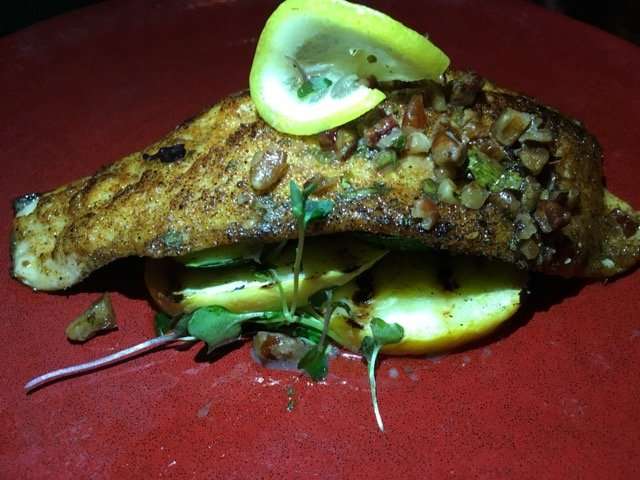 Muddy Waters, the New Orleans style restaurant that opened recently in Thornton Park, has a second part to its name, a subtitle, as it were. The full name is Muddy Waters, A Two Chefs Restaurant.

But not just any two chefs. They’re Bernard Carmouche and Larry Sinibaldi, the two chefs of Two Chefs Seafood Oyster Bar. That’s key information. Because anyone who has been to that North Quarter restaurant, or is familiar the work of the chefs when they cooked separately — Carmouche with Emeril’s and Sinibaldi with Palm Restaurant —knows that the quality of the food at Muddy Waters is bound to be first rate.

In New Orleans style, there’s a fresh oyster shucking station at the other end of the bar, and over the back bar are blackboards with menu and drink options.

The food is a nice blend of traditional and creative.

The Crab Parfait, for instance. It featured sweet jumbo lump crabmeat on top of pickled mirlitons, with a cucumber yogurt and puffs of crackling crackers.

And Smoked Fish Dip, served in a hinged-lid jar and topped with the black pearls of Cajun caviar.

Firecracker Shrimp, emphasis on the fire, were an explosion of flavor. (Would have been nice to have some moist towels for the messy fingers.)

Shrimp & Grits had lots of cheddar cheese blended in and the mushrooms and andouille sausage were nice additions.

Grilled Redfish had spinach and sunchokes with the defly prepared fish.

You’d expect a New Orleans restaurant to have good gumbo, and Muddy Waters does. The well-cooked blackish broth might actually be how the restaurant got its name.

You wouldn’t expect a New Orleans restaurant to have tacos or poke, but Muddy Waters does. The former features pork belly and the latter cubes of cool, raw tuna.

Although still quite new, the restaurant’s young staff was efficient and quick to respond to requests.

The two chefs will continue to run Two Chefs. Both are great additions to downtown’s dining scene.