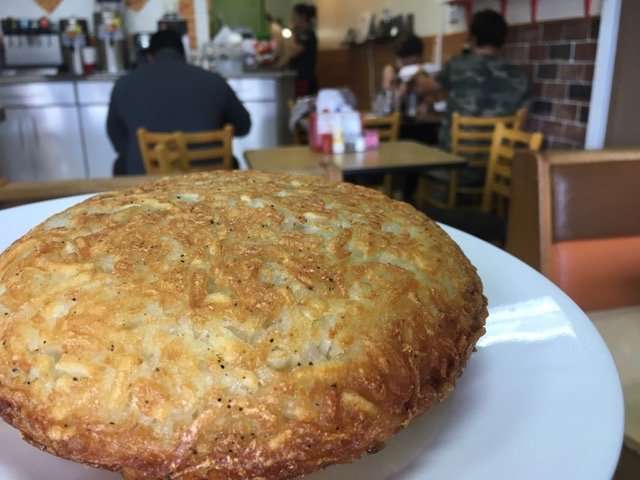 I wonder what Mrs. Potato’s maiden name was. Does she call her kids tots?

I’m also wondering if Mrs. Potato is Brazilian or Swiss?

The Mrs. P in question has a small potatoria in south Orlando in the vicinity of Metro West. True to the name, Mrs. Potato serves mainly spuds, supplemented by a variety of meats, cheeses or combinations thereof. You can get them in the form of a boring, dull baked potato, or you can have the rosti type, which the website touts as “the original Brazilian style.”

But technically speaking, rosti potatoes originated in Switzerland. If you saw them, however, you might think they were the product of Mel’s Diner, as they are essentially hash browns.

Well, they’re so much more than hash browns. In a diner, the hash browns are a side dish. Here, the rosti potatoes are the main attraction, and they’re so big that there’s no place on the dish for a side of anything.

You can have your potatoes with chili, with beef stroganoff (Swiss, Brazilian and Russian?), or alla bolognese. To keep mine with a more Portuguese accent, I ordered the one with calabresa, cheese and onions.

It looked like something you’d find in the Olympics — I didn’t know whether to throw it or eat it. Eating it was the better option.

Tucked in the center of the discus were bits of the calabresa, or linguiça sausage. The outside of the potato device was well browned and crisped. Inside, the potato slivers were moist, but not greasy. Well seasoned and more than filling, even only eating half, less than half of it.

The surroundings are spare and functional. There’s a shrine of sorts to Guy Fieri, who featured the restaurant on his “Diners, Drive-ins and Dives” tv program. Serving staff is friendly and helpful.

By the way, my leftover rosti didn’t go to waste. I heated the remainder in a cast iron skillet and topped it with two eggs sunny-side up. Uniquely American.