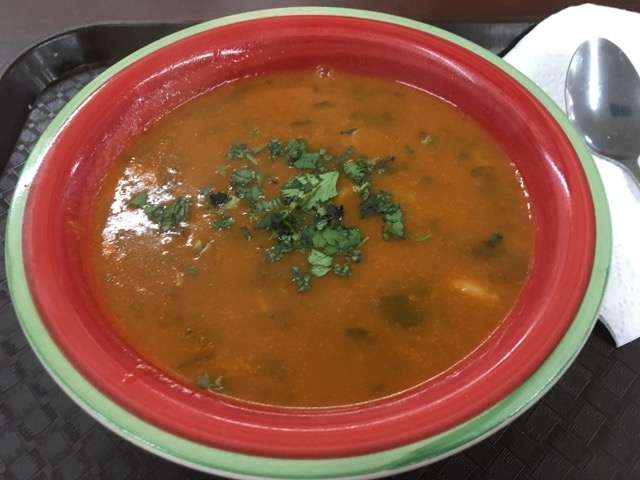 Moroccan Breeze certainly wasn’t what I was expecting.

But sometimes you have to step out of your comfort zone to find new places.

Moroccan Breeze was located at the back of the Apna Bazaar in South Orlando in a sort of minimalist food court. Just off to the side of the food court were the restrooms, designated for men and women, and prayer rooms, also so delineated.

After looking over the menu board, I ordered the Harira, a Moroccan soup, and a Lamb Tagine.

Harira is traditionally served to break the fast at Ramadan but is also a popular starter course year round. Although it often features a base of lamb broth, Moroccan Breeze’s is completely vegetarian. It had a tomatoey broth and chickpeas and lentils for the necessary beans. There were bits of onions as well and a sprinkling of parsley on top for extra flavor as well as an aesthetic appeal.

The Lamb Tagine featured a large shank, wonderfully tender from long cooking, covered in a gravylike sauce with lentils and slices of green olives. Although its appearance was congealed, the flavors, spicy and sweet with an appropriate gaminess from the lamb, were very good. As is traditional in Moroccan cuisine, the tagine was served only with bread. But I found myself wanting some couscous or rice to go with the sauce.

Both the soup and the lamb were served on colorful earthenware dishes, which was nice. It would have been nicer to have been able to eat the food with something more substantial than the flimsy white plastic utensils.

The gentleman who served the food was friendly and welcoming.

I was clearly an outsider in this community, but I did not feel self-conscious or that I was being eyed suspiciously. After my meal, I strolled through the market that anchors the Bazaar and was fascinated by the products and the displays, and by the men in the meat shop breaking down a whole goat carcass. I’m definitely coming back to do some grocery shopping.

And I’ll stop by Moroccan Breeze for one of the couscous dishes.