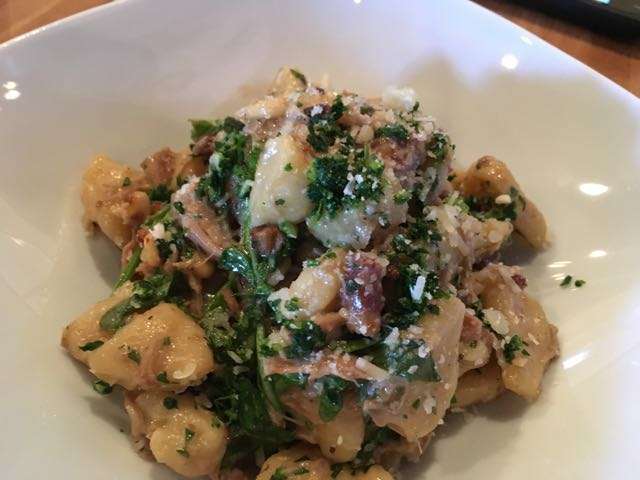 Millenia 106 is a pleasant surprise, an inviting and casually upscale decor with food to match.

That food is under the direction of chef Bruno Fonseca, whose resume also includes Todd English’s bluezoo and Norman’s at the Ritz-Carlton.

The menu isn’t easily pegged, but creative American might be an apt description, with a greater emphasis on the creative.

On a lunch visit, I chose the Pork Belly BLT, which took the familiar stacked sandwich and replaced confit belly for bacon rashers and added roasted tomatoes, onion marmalade and avocado on a ciabatta roll. Delicious.

One of my companions chose the Chicken Gnudi, which featured the potato dumplings, densely al dente, tossed with tender braised chicken, bacon, pine nuts, spicy arugula and a bit of gremolata.

On an evening visit I went for the Portuguese Surf & Turf, which had a Rubik’s Cube size hunk of pork belly representing the turf and tile fish collar and head-on local shrimp from the surf. The pork belly was wonderfully fatty, and I enjoyed the crispy collar meat, too.

My companion had the Steak & Egg, which had hanger steak, grilled to a gorgeous medium rare and sliced, served with an Arzak egg — essentially an egg soft boiled outside of its shell. Not the prettiest thing, but effective in its texture and resulting ooze. But it was the steak that was the star. Haven’t had meat that tender and tasty in a while. Confit potatoes rounded out the dish.

By the way, there wasn’t a thing on the menu over $19 at dinner, and most were in the mid teens. Very reasonable prices for such good and creative cuisine.