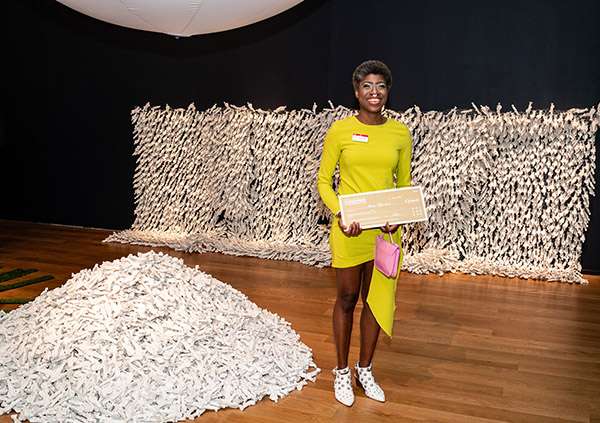 Kenya (Robinson). Photo courtesy of the Orlando Museum of Art.

Kenya (Robinson) is the winner of the 2018 Florida Prize in Contemporary Art. This is the Orlando Museum of Art’s fifth year showcasing emerging and mid-career artists from across the state. Kenya is from Gainesville.

Her work investigates themes of privilege and consumerism. The exhibit stems from a project she has been working on for four years called “The White Man In My Pocket.”

She got the little plastic white men manufactured in China. The idea started as a joke when she worked at a children’s museum in Brooklyn.

“It was a wonderful experience. If anything, if anybody can get your mind right, it’s a 2 1/2 to 5 year-old,” she laughed.

The children used figures to pretend and imagine themselves as professionals including a pilot, a police officer and such. The set had a white male executive and Kenya’s boss decided not to put that imagery out for the kids—the logic being they will undoubtedly get that elsewhere.

“And we were kind of just joking about this figure executive and the fact that as we represent executives and the executive experience, that it is made masculine instead of feminine or both and so, she gave it to me as kind of as a joke,” said Kenya.

That little executive figure inspired the little white male figures she used as material for her award-winning exhibit this year. She said it explores corporate structures, racism and how it affects all of us. She hopes it raises more questions than it answers.

Click the audio player above to hear more about Kenya’s exhibit and what she wants museum-goers to get out of it.

The Orlando Museum of Art 2018 Florida Prize in Contemporary Art exhibits will be on display until August 19.