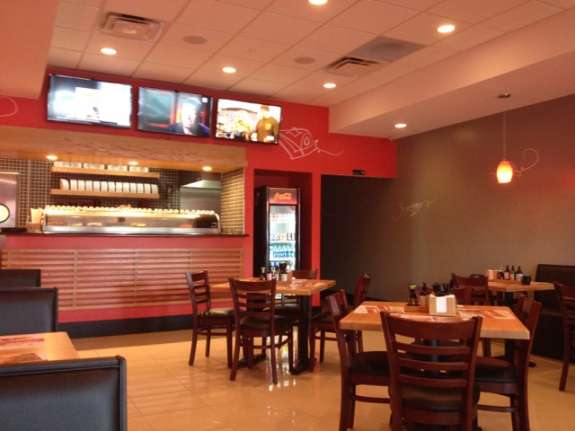 Makis Place is a new franchise that has just moved into the U.S. that specializes in temaki, the sushi handrolls, as well as sashimi, nigirizushi and rice bowls, so you’ve probably already figured out that company is headquartered in Brazil. It has just begun its expansion outside of Brazil, which, according to the company’s website, has the largest Japanese population outside of Japan, and one of its first Florida stores is on Park Avenue in Winter Park, directly across the street from Umi, which specializes in sushi and Japanese dishes.

But as I said, the reason to eat here is the temaki, which sort of resemble ice cream cones but with nori, the seaweed sheets, instead of a waffle cone and cubed fish instead of gelato. So, really nothing like an ice cream cone except that it can be eaten with one hand and no chopsticks.

So, it’s a convenience thing. Fast, too, if my experience was any indication. Not that there were any orders ahead of mine, but my temaki with tuna and whitefish came out lickety-split, if I can use that term on something other than ice cream.

The nori cone had some sushi rice in the bottom and the mixed fish on top. I had been asked what toppings I wanted on the roll, but I figured that was something the sushi chef should decide, so there were none.

And it was all perfectly palatable. The fish was cool, though not too cold, and it was quite refreshing. Rather small for $6, however.

I had finished in probably less than five minutes. The server brought my check and ran my credit card on her handheld pad, which had already suggested an 18 percent gratuity. Because, you know, she did so much to earn it.

Makis Place might be fine if you want something quick and fish based. But if you’re looking for a better sushi dining experience, you might want to look elsewhere. Like across the street.