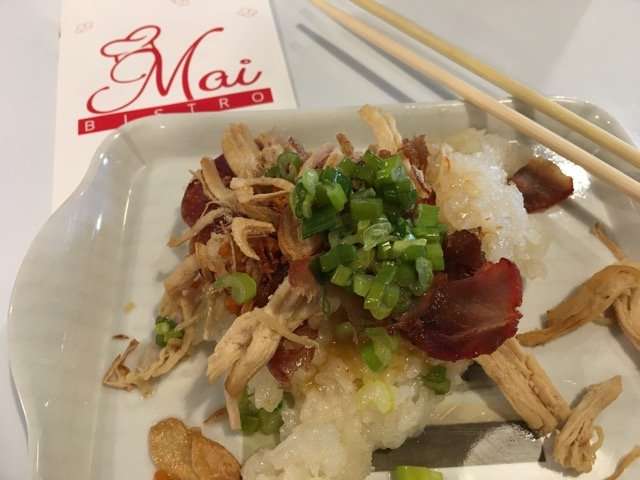 Mai Bistro, a Vietnamese restaurant, has opened in the Mills 50 district, bringing a bit of difference to the Asian-restaurant-rich neighborhood. Not only different, but very good.

The menu features street foods of Vietnam — nothing new there, Hawkers and Mamak are also in the street food business. But Mai — that’s M-A-I —brings a combination of fast- and quick-serve. And instead of the small-plate, Asian-style tapas servings, Mai Bistro offers full sized portions.

You’re going to want a complete serving of the Sticky Rice, one of Mai Bistro’s specialties and a dish that is surprisingly hard to find locally.

I love sticky rice and it’s one of my go-to street foods whenever I’m in New York’s Chinatown. In Vietnam, it can be had in sweet or savory versions, though given that coconut milk is one of the ingredients that adds to the stickiness even the savory has a bit of sweetness.

I had a mix of some of the available toppings, including shredded chicken and a dried Vietnamese sausage, topped with fresh chopped scallions. It was all delicious, and I could have made a meal of it.

But I went overboard. I had an appetizer of Steamed Bun, as big as a snowball, filled with seasoned pork, served hot and chewy.

And a Bánh Mì, the one designated B1 on the menu, that featured a combination of cold cuts, including pork, ham and headcheese. The roll for a bánh mì is one of the most important factors and Mai Bistro bakes its own right in the back. It had the perfect combination of fresh breadiness with a crispy crust (thanks to a bit of toasting before stuffing). Inside, along with the ample portions of meats, were the pickled vegetables and fresh cilantro (coriander, if you prefer) that give it its distinct taste.

I also sampled the iced Vietnamese coffee, which was wonderfully refreshing and tasted a bit like a chocolate shake.

Mai Bistro moved in to the space that had previously been the offices for a Scientology chapter. And if you think I’m going to make a joke about that then you aren’t familiar with the litigiousness of that group.

But you should really see yourself clear to get by and try Mai. It’s a welcome addition to the district.