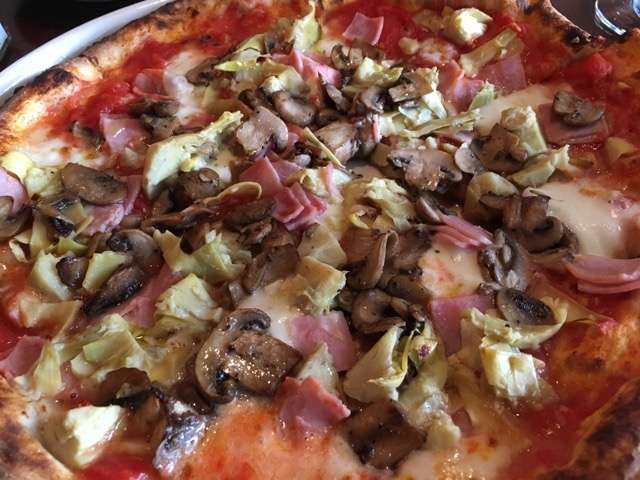 Maestro is a partnership between Rosario Spagnolo of Terra Mia in Altamonte Springs and Antonio Martino, a Brazilian businessman who owns five McDonald’s franchises there. Don’t let that give you pause; there’s nothing clownish about the food here.

The food is solidly good quality, the atmosphere cozy and comfortable, and the service accommodating.

On my first visit my companion and I did some sharing. We started with Pasta e Fagioli, one of my favorite Italian soups. A good soup at that. A large bowl of cannellini beans with strips of pasta in a lightly tomato-tinged “beany” broth..

Veal stew was quite unstewlike. Virtually no broth or gravy of any kind, but it had plenty of peas and carrots covering the hunks of meat. Not your ordinary stew, but also quite good.

We finished with a slice of house-made Tiramisu and reminisced how about how 15 years or so ago just about everyone had tiramisu on their dessert menus. Now it’s almost impossible to find, even rarer is to find one this good.

On a lunch visit my guest and I had the Antipasto Della Casa Maestro, an assortment of samplings from a table set up at the back of the restaurant, a concept that Spagnolo adapted from his other restaurants.

The platter had plenty of salumi, peppers, eggplant, olives and bruschetta.

We were almost too full to eat our Capricciosa Pizza. Almost. There were copious amounts of ham, artichoke hearts, mushrooms and mozzarella on a delicately thin crust slathered with just the right touch of red sauce.

When he announced the restaurant, Spagnolo said that he and his partner had plans to produce a concept that might be franchiseable. Frankly, I don’t see anything here that would lend itself to mass reproduction, but I certainly support the efforts to take this style of authentically delicious Campania cuisine to the masses.