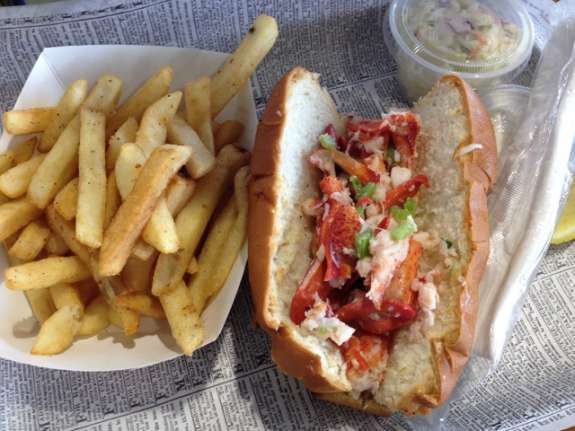 The new location keeps a little bit of the warehousey feel but it is definitely spiffier.

And there’s a better space for a cafe than at the old location. They were still working on a soft-opening menu when I visited. But some of the shortcomings with the food I sampled had less to do with being new than with just being odd choices.

For example, the Maine lobster roll. It had plenty of fresh lobster meat, just as you would expect from a seafood market, but it was mayonnaise-free and in fact rather dry. To be sure, there are some places in New England that do not dress the lobster with mayo, but its inclusion has become almost de rigueur.

Also, the roll it was served on wasn’t nearly as buttery or toasted as it should have been. Still, at $13.98, it’s priced less than other lobrolls you’ll find locally.

Odd, then, that my Key West grouper Reuben was 16 bucks. Not only did it have a preciously small amount of fish in it — so little that I couldn’t tell you if it had been blackened, as the menu said it would be, or not — but it also was served with coleslaw on it instead of sauerkraut, and it had no swiss cheese. You can make an argument for a lobster roll without mayonnaise but not one for a Reuben without sauerkraut or swiss cheese.

The Key West pink shrimp po’boy featured larger shrimp than a traditional po’boy would, but the breading was nicely done and they were perfectly fried. This was undoubtedly the best of the three sandwiches.

All came with fries, which were easy to set aside.

Lombardi’s Seafood cafe operates as a quick-serve operation: order and pay for your food at the counter and someone will bring it to your table when ready. The folks there were friendly, especially considering that they were obviously having a difficult time keeping up with the influx of guests during the lunch hour.

It’s nice to see a local institution move to nicer digs — even if it means I have to drive a little farther to get fresh fish for my grill. The people here know the fresh fish business very well, but they’d do good to get some expert advice on how to improve the cafe selections.