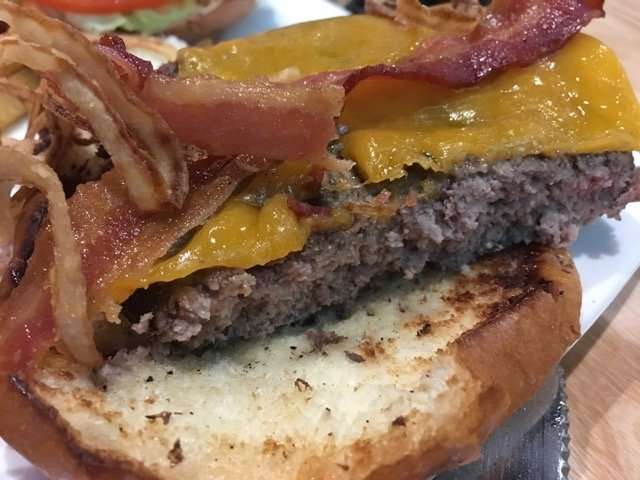 For a place called Lion’s Pride, there’s not a whole lot to be proud of at this soccer-themed sports bar and restaurant.

I suppose the developers could take some satisfaction in having created a sports bar of epic proportions. The orchestra-and-balcony style stadium seating facing a wall of giant televisions provides great viewing.

But although they’ve got the visual part down, this sports bar loses on all other aspects, from service to food and even to the warm and flattish beer.

A good sports bar should be able to manage a decent burger. LP’s All American Bacon Cheddar Burger certainly looked good, a thick patty topped with a slab of almost melted cheddar cheese, a couple of rashers of bacon and crisp-fried onions. But the burger was overcooked — by a lot — and was hard and dry as a result.

And who serves a burger with fries without ketchup, especially one called All American?

Noticing that there was no ketchup, my friend and I asked the food runner if we could have some. He ran the other way and was never seen again.

The Churrasco Steak I ordered might have been good if it had not been served cold. Nothing could have helped the tostones that accompanied it — they were hard and flavorless. The rice was gummy. The chimichurri sauce had separated and was mainly oil.

Even our draft beers, which took a long time to arrive –our server told us when we inquired about the long wait that the bartender was “working on them,” which had me wondering what sort of unusual labor might be involved — weren’t very cold and had lost some of the sparkle.

I did not complain about the beers, but I did tell my server that the $22.50 steak was cold and the $14.95 burger was overcooked. Her response was to remove the $5.50 charges for the beers from the check.

If indeed she told a manager that there were unhappy guests, no one came by to attempt to ameliorate the situation.

Yes, it was a game night, and yes the place was packed — great to see the enthusiasm for Orlando’s soccer team. But it was not a secret that Orlando was playing that night, so why was the staff caught unaware?

This could be a really great sports bar. But it would need better food, more thoughtful and better trained servers, and managers who are present and involved.

By the way, although Lion’s Pride opened in May, the website says, “New website coming soon,” so I assume it is being designed by the bartenders.