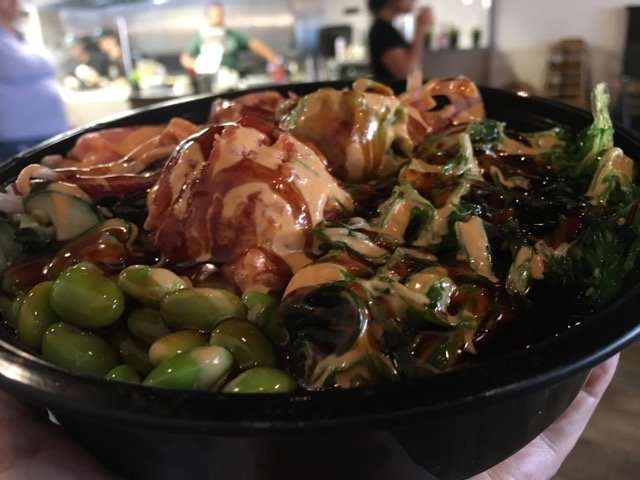 Sometimes when a food fad starts trending, we scratch our heads in befuddlement of what all the fuss is about. (I’m looking at you, cupcakes.)

But occasionally, you’ll happen upon someone who is doing the current food a la mode in such a way as to produce an aha moment, where you say, “OK, now I get it.”

If you’ve been wondering about the surge in restaurants offering Hawaiian raw fish bowls, your eureka! is waiting for you at LemonShark Poke on Restaurant Row.

For those still unfamiliar with it, poke is similar to Japanese chirashi, which features raw fish served over rice. But whereas the fish in chirashi is basically the same as sashimi — that is, sliced in the same rectangular size and unadorned with any other seasonings or accouterments — poke is more of a raw fish salad. It may or may not be served over rice, but add-ons are part of the mix.

Like many of the other poke restaurants that have opened recently, LemonShark is an assemblage operation. You pick your base, a variety of rices, greens or wontons, then the fish, the toppings and the sauce. With over 20 toppings and about half as many sauces, the combinations are exponential, which also increases the chances of assembling a lousy bowl of crap.

So instead, I opted for the Aloha Tuna Bowl, a preordained grouping that featured ahi tuna (yellowfin) and spicy tuna, one cubed, the other chopped, with toppings of cucumber salad, seaweed, edamame, avocado, ginger, red onions and a dusting of crispy garlic. Two sauces — spicy mayo and eel — topped it all.

Although those ingredients were set, I still had to choose the base. I chose sushi rice, and that provided a perfect platform.

The toppings, including the fish, are sectioned separately atop the rice. As you eat, you may sample them separately or mix it all together. I appreciated the sweet notes of the cucumber salad and the pungency of the ginger. The edamame beans and seaweed added nice crunch, and both sauces added a bit of spice.

LemonShark is a nascent franchise out of California with only a handful or locations.

I hope as they grow they can continue to offer the same freshness and quality of their Orlando store.