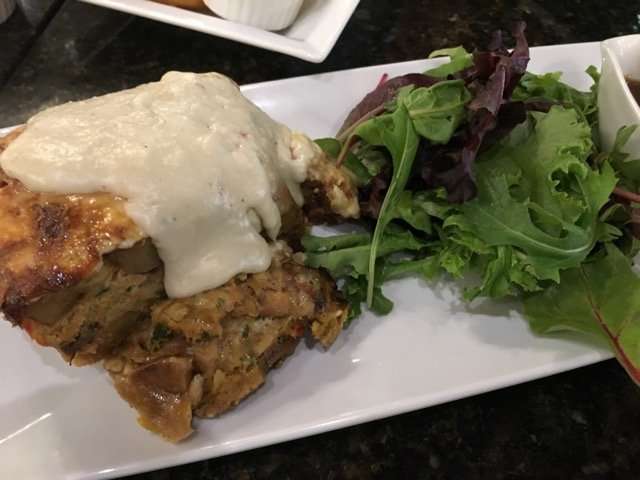 There’s something about the name Laurel Latin Cuisine that I find quite forgettable. And that’s not good for a restaurant that’s hidden off the main thoroughfare, tucked in the back of a building on Park Avenue. So when I arranged to meet a friend for lunch in Winter Park, I said, “Let’s go to that new restaurant.”

“I can’t remember,” I responded, “but it’s where Paris-Bistro used to be.”

“Paris Bistro is gone?” She was shocked, even though she works just a few blocks away. That might help to explain why Paris-Bistro is gone.

Now that I’ve eaten there, I think I’ll have an easier time remembering Laurel Latin Cuisine.

The menu is an amalgam of several Latin American countries. And not all of it is necessarily authentically presented, but that didn’t matter — everything I sampled was delicious.

Take the Cuban sandwich, for instance. Laurel’s had the requisite roast pork, ham and swiss cheese, as well as the absolutely necessary dill pickle slices and slather of yellow mustard. But it was served on a baguette instead of Cuban bread. And there didn’t seem to be a press involved.

But that didn’t matter. It was a good sandwich, mainly because of the ample portion of meats (and those tangy pickles).

I also had the Pastel de Pescado, or pulled fish pie, mainly because I thought it would be fun to say pulled fish pie. This was similar in construction to a Greek moussaka, but instead of eggplant it had chunks of green plantains. And instead of lamb there was fish. And there were potatoes. OK, it was nothing like a moussaka, but it was topped with bechamel, and it was quite delicious. (Might have been served just a tad hotter.)

The Empanadas were also a bit different from some others you may have had. Instead of a flaky turnover pastry, these were slightly more doughy, almost like an arepa texture. Inside was well seasoned ground beef and cheese. A cilantro dipping sauce was provided but really not needed.

Laurel Latin Cuisine was a pleasant surprise. It’s a nice addition to the ever-changing restaurant scene on Park Avenue. If you’re in the area, remember its name.