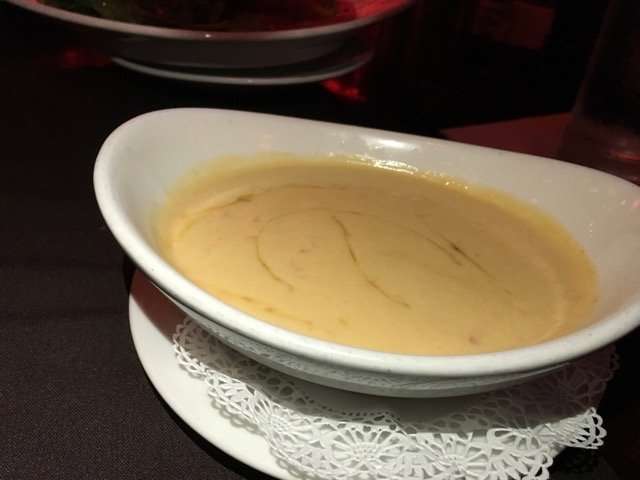 I don’t know why, but Kres Chophouse hardly pops into my mind when I’m asked about recommendations for downtown dining. Maybe it’s because the last couple of times I had dined there I found it to be only so-so. But I recently decided to give it another go, and I’m glad I did.

My companion and I started with a salad of Warm Bacon & Spinach, which had crumbled goat cheese, sliced heirloom tomatoes, and a topping of crisply fried onion frizzles (so much better than croutons).

For the soup course, we chose the Lobster Bisque, a velvety smooth broth with a sweet tinge of lobster and a hint of sherry.

The New York Strip au Poivre couldn’t have been better. The steak had a wonderful crust that was blackened, partly from the sear and partly from the cracked peppercorns. It had been cooked to a lovely red medium rare and was every bit as delicious as it looked. A brandied mushroom sauce had been ladled over it, and it was accompanied by potatoes au gratin and thick-but-tender spears of asparagus. It was worth the $36 fee.

Service was prompt and efficient. And the space still has an air of elegance with its high ceilings and posh furnishings. You almost feel as if you’re in a private club.

This place has a lot of history. It was once Bailey’s Cityside — you might remember the squadron of flying ladies overhead — then Pebbles Cityside, then just Pebbles. It’s been Kres for over 13 years, with varying degrees of quality.

It’s definitely on an upswing, and I’ll be happy to put it back on my list of downtown recommendations.