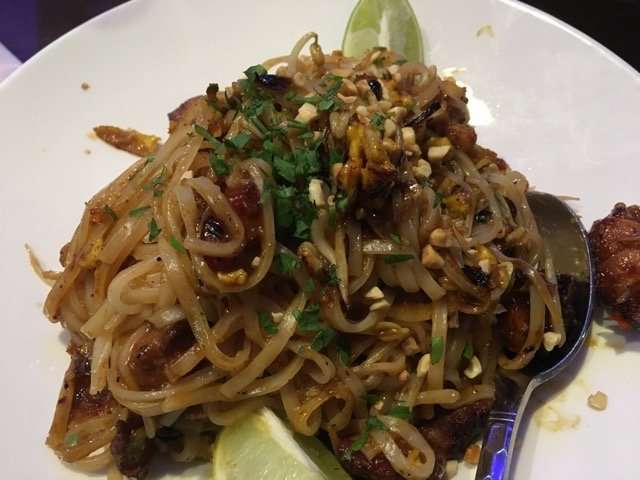 Silly me, I was expecting Hawaiian, or at least Polynesian. I mean, what else should one infer from a name like Kona Grill?

And there are a lot of Asian and Pacific Rimmy kinds of dishes on the menu. There are sushi offerings and the requisite poke bowls, some egg rolls and some stir-frys.

But of course the first thing I spot on the large menu is Jambalaya. The second thing is a Cuban Sandwich. So immediately I’m thinking WTF, which stands for What’s the Theme?

I’m going to go with “big and splashy,” with a side of “feed as many people as you can at once.”

It’s a very large space, and it doesn’t appear to have been cheaply appointed. Booths and chairs are attractively upholstered, but it all felt rather impersonal.

And the food is modest, at least what I sampled. Who knows, maybe that jambalaya is the star of the show.

But I stayed with items I thought sounded like they should be served in a Kona Grill.

My companion and I started with the Kona Calamari, which despite being a tad greasy had good seasoning in the deep-fried breading and were mostly tender.

Pad Thai Noodles was a smallish serving considering its $16.50 suggested retail price. That’s the price with chicken, hard nuggets that seemed as though they had been deep fried. There also didn’t seem to be much in the way of flavor, at least not until I availed of the line wedge that was provided and gave the rice noodles a good squirt.

My friend didn’t do much better with the Spider Roll, which was quite small, loose and inexpertly rolled.

The atmosphere is boisterous, thanks in part to an open kitchen where staffers shout at each other as though they think the guests can’t hear. Or they don’t care if they can.

A bright spot: Our server was accommodating, and the food was delivered quickly. Feed a few more.

Kona Grill is a franchise chain that started in Scottsdale, Arizona, in 1998. It has locations across the continental U.S. and even one in Hawaii, which probably doesn’t get a lot of Cuban sandwiches or Jambalaya.