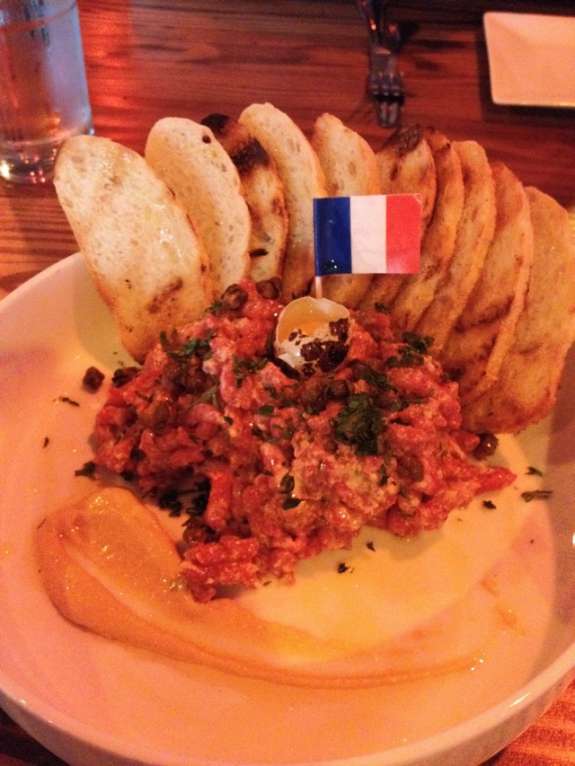 Just when you thought that every possible gimmick had been exploited in the restaurant world, along comes Kokino, a new restaurant in the Bay Hill Plaza in the Restaurant Row district.

It is, in essence, a tartare bar.

Yes, that’s right. Kokino’s owners are hoping that the thing diners have been craving is a varied selection of tartare preparations. Not just the standard steak tartare, but also other meats and seafood.

The tartare menu is presented in a sort of chart. The first part shows the various proteins and, on either side, the price for a four ounce or an eight ounce portion. Beneath that chart is a list of of countries or regions that are representative of the other ingredients, seasonings and presentations available.

For example, if you’re looking for a classic steak tartare presentation, you’d go for the Paris style, with Dijon mustard, capers, shallots and Worcestershire sauce. (Kokino also adds cognac, which I’ve not seen in any classic tartare recipes, but there you go.) If you’d prefer something Bangkokian, you’ll find avocado, sweet chili, cilantro, basil and orange blended in.

The classic tartare was served with a raw quail egg, its top lopped off, for us to blend into our meat. It was mostly OK. Though it was not the best steak tartare I’ve ever had, it was far from the worst. The flavor could have been vastly improved with a couple of dashes of salt (none was provided).

But here’s where it fell short. For a classic tartare, the meat should be chopped. The raw beef here appeared to have been run through a grinder and so was in the form of little strands instead of tiny cubes. Yes, it’s still the same meat, but the texture is not the same, and that can affect the taste.

The Tokyo tuna had soy sauce and rice wine mixed in, along with lime juice, sesame oil and black fish eggs. This one got it right on the texture of the fish, but it was overly soyed — no need for added salt, for sure.

Kokino apparently wants to set an ultra-lounge/nightclubby mood that that will appeal more to a youthful crowd. They’ll like the techno music, but I’m not sure they’ll get the tartare angle.