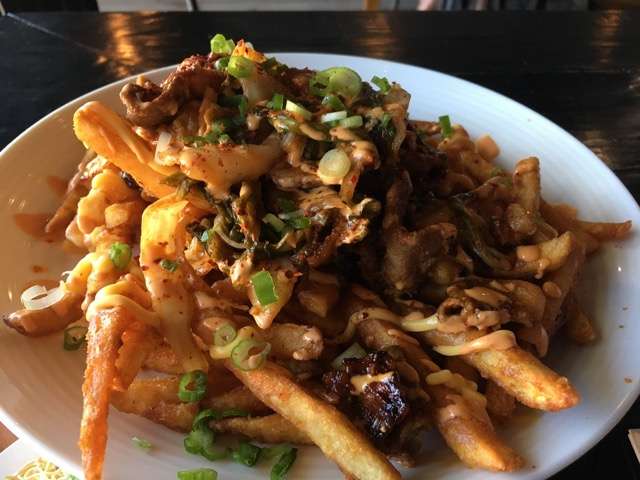 Oh goodie, another “street fare” restaurant. How did eating foods sold on the street become the hot trend for off-street restaurants? And, more importantly, when will it finally fizzle?

I suppose it won’t as long as there are restaurants that do the street thing as well as Kai does.

To be blunt, as a restaurant, it seems that Kai’s owners are making it up as they go along. It’s a little rough around the edges and offers inside comforts only slightly better than a street curb. I like the hand-lettered sign instructing people to order at the counter. Then, realizing afterwards, apparently, that there are two counters, a small one in the corner that is meant for ordering and the counter to the open kitchen, it became necessary to adjust the sign.

But the food is solid, even if one might question the actual street cred of some items.

I felt compelled to order the item called K-Pop and Lock listed under the Loaded Fries heading. It featured a stack of fries with a very nice crispy crust topped with bulgogi style marinated beef and kimchi. It was sort of a crazy style of reinvented nachos, and I liked the spiciness of the kimchi.

I also had the item known as Dude, Where’s My Ca. Some of the food names are a bit obscure, this one a play on the title of the 2000 Ashton Kutcher movie about a missing car. But the ca here is cod, battered and deep fried with a mildly seasoned crust. It’s served with a sort of mesclun salad mix on top of a flour tortilla, which is why it’s under the Tacos heading.

I am weary of the street food genre but always happy to find good food under any designation. But I’m looking forward to the day when someone with a street cart starts offering a four-course gourmet table d’hote.