Spotlight: Julie’s Waterfront Gets Outside Makeover 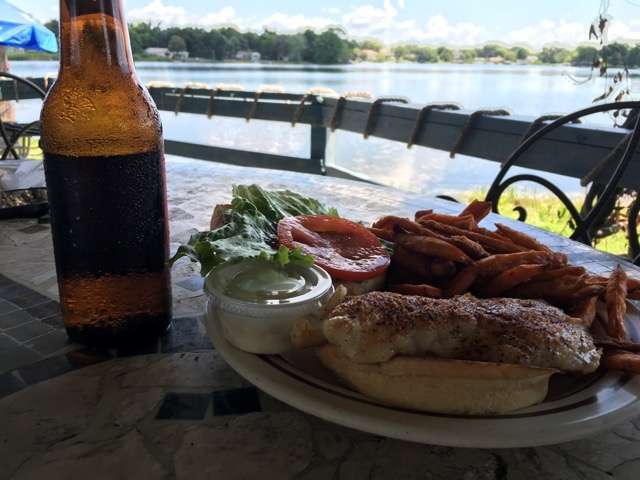 Don’t you hate it when someone moves into to the neighborhood, does some painting and landscaping and generally makes your place look like heck?

That’s sort of what happened when Vanbarry’s moved into the neighborhood where Julie’s Waterfront had been living so comfortably — and unchallenged — for so long.

Vanbarry’s became an immediate hit. And it couldn’t even boast a waterfront venue like Julie’s. It’s across busy Orange Avenue and up a hill.

And Julie’s, which had had a loyal clientele for many years, suddenly found that its parking lot was all but empty while up the hill people were circling the much bigger lot looking for a space.

So Julie’s did what most neighbors do when the newcomer shows them up — it spiffed up the outside with a new paint job.

An elaborate paint job, too, with waterscape murals on the side of the building and a bright, new yellow canopy over the entrance.

The inside? Not much there.

It’s still a bit divey, with the air and appearance of a barebones operation at an actual beach. But then, Julie’s allure, at least to me, has always been its outdoor seating and the Waterfront of its name.

I stopped in one recent weekend with a friend for a beer and lunch. My friend had a burger — which was always one of my go-to Julie’s items — made more brunchable with the addition of a fried egg. A square of cheese, no doubt freshly freed from a cellophane wrapper, melted upon the top. It was cooked a bit beyond the requested medium rare, but it was still juicy enough and was nicely presented with leafy lettuce, a thick slice of fresh tomato and a raw onion.

I chose the grouper sandwich, grilled, with Cajun seasonings, which means a heavy sprinkling of peppery spices, served on a fresh tasting bun with the same accouterments as the burger, plus a tiny tub of tartar sauce. The fish was perfectly grilled and I liked the spicy notes.

One of the draws of Julie’s was always the chance for a water skiing demonstration on the lake, and we weren’t disappointed. A couple of skiers were apparently trying to hone their skills.

Best of all, our beers were good and cold. That’s really what we expect from Julie’s.