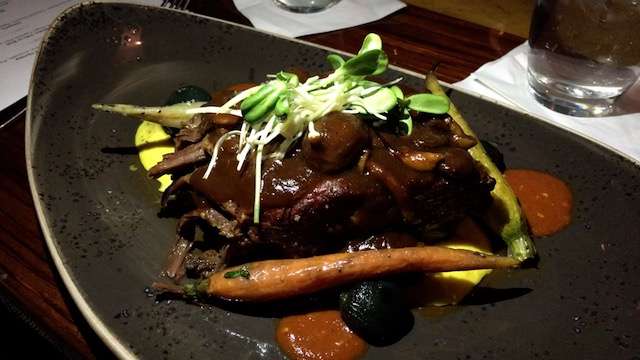 Jiko – The Cooking Place is among the restaurants that will be participating in this year’s Chef’s Gala. I was asked if I’d like to sample the dish that Jiko’s chef, Edward T. Mendoza, would be offering at the April 14 event, so I said sure, why not? I hadn’t been to Jiko in a long time, it would be nice to see what’s going on there these days.

Good things, it turns out. Let me put it this way: As soon as the bus drops you off at the World Showplace at the beginning of Chef’s Gala, head directly to the station, or cooking place, if you will, where Mendoza and his team will be serving their Isitambu.

Isitambu is an African dish of beans and samp, broken dried corn kernels. It’s a traditional dish of Africa, this one in the Zulu style, that Mendoza said was the favorite food of Nelson Mandela. Although it’s not usually considered an haute cuisine dish — it’s often served as an accompaniment — Mendoza makes it so with the inclusion of braised oxtail. It was seasoned with a fragrant garam masala that offered myriad spice notes, and that oxtail brought a wonderful fatty mouthfeel.

I’d have been more than satisfied to sup on a larger bowl of that, but Mendoza also served an appetizer of Oak-Fire Kissed Red Shrimp, with Congolese pili pili butter, accompanied by fried okra.

For the main courses, Beef Short Rib was served with a puree of cassava and potatoes, topped with a spicy sambal sauce, with baby carrots nearby (these were more like teenaged carrots). The beef had been braised into tender submission.

I also sampled a sort of African bouillabaisse, with Malay curry-scented lobster hunks, tender squid, big, meaty (but not chewy) mussels, and shrimp, with saffron rice beneath the flavorful broth.

Jiko is still an impressive dining room, with its central ovens representing the Cooking Place and the stylistic birds swooping around the room. However, the quality of the food could use a more sedate ambience. Service was first-rate.