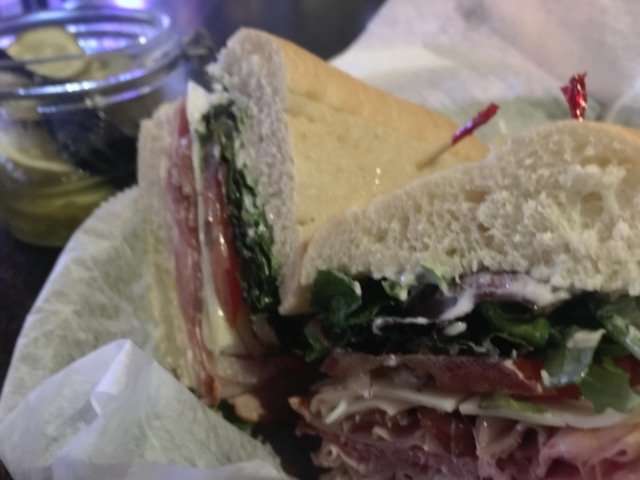 The original name was meant to be a tongue in cheek play on Saks Fifth Avenue’s name.

Those who are old enough to remember the first Jax and who are still able to consume solid food will find that a lot is the same at the new place, which is in the former Baoery/City Fish space on Central Boulevard.

In fact, Thompson said he was going for nostalgia. You’ll see it mostly in the menu, which has the same look and feel as the one from the old days. There might be some new items — I don’t think the original menu had a sandwich called the Thornton Park. I’m not sure Thornton Park was even called Thornton Park back then.

The Winter Park jab is still there with the sandwich called The Park Avenue. Or maybe that’s a jab at New York. Whatever, it comes with Dom Perignon, a ham sandwich and a Harley Davidson, though the punchline with the price is missing. (I think it was $25,000 with a two-week delivery, but that was the price in early 1990s dollars.)

I don’t recall there being one called the “Filly” Steak, spelled with an F, because I almost certainly would have pointed out how ill-advised it would be to call a horse to mind when naming a meat sandwich.

But I’m pretty sure The Legend sandwich was there because it’s noted on this new menu as the “Original Jax.” It’s essentially an Italian, with Genoa salami, ham, Prosciutto and capicollo, along with provolone, lettuce, tomato and onion and a good drizzle of oil on a mayonnaise-slathered roll. The meats were ample and the bread was fresh.

Even better, it came with the hinged-lid jar of pickles that were a Jax signature. I remember them already being on every table at the old place; here the server asked if I wanted the house pickles. (I wanted to say, “I’m here, aren’t I?” but instead I just said yes, please.)

Something else that’s different: There is a big list of craft beers, which weren’t a thing back then. Also, the new place is big enough that Jax serves full liquor.

A bigger space, however, doesn’t mean it was full. In fact, on a midweek evening there were so few diners that the bartender was also serving the dining room.

Maybe it’s still too new. Or too old? Nah, a good sandwich and a cold beer never go out of style.