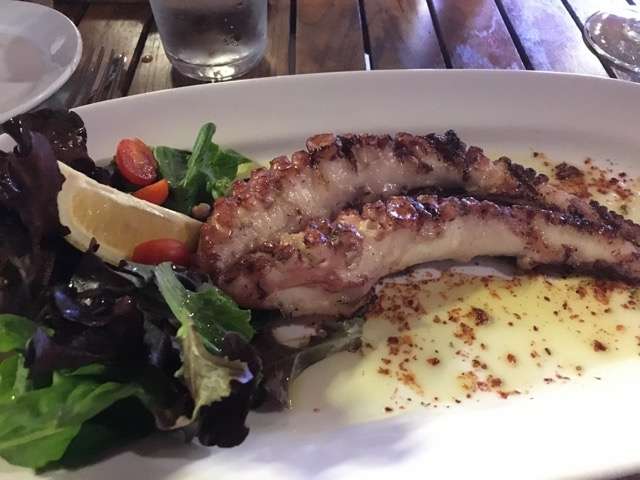 Itar sounds like it might be the name of a far off land, but it’s actually a portmanteaux of Italy and Argentina, the two cuisines represented on the menu.

Itar Bistro Market is the project of Mariana Moya, a graduate of Le Cordon Bleu, who serves as the chef. Quite ably, I might add. Everything that my companion and I sampled on a recent visit was top notch, both in quality of ingredients and their preparation.

We started with an appetizer of Grilled Octopus, which Moya imports from Spain (So maybe the name should be Spitar?). If I’ve had a better serving of octopus, I can’t recall it. The tender tentacles had just a perfect char on the outside, and the smoky flavor complemented the sweet meat nicely.

For an entree, my friend chose the Churrasco, a marinated and grilled skirt steak that was impossibly tender. He sprang for an extra two bucks for a fried egg to top the steak, which added some nice unctuousness with the yolk.

If there had to be one thing that didn’t fully thrill it would be the Egg Pappardelle alla Bolognese. The pasta was nicely produced and cooked al dente, but the sauce was a bit dry. Good flavors, but not enough sauce to coat the wide noodles.

Our server was quite good (though really one should learn the Spanish names of the dishes). And others on the staff were just as warm and gracious.

As the name implies, Itar is also a market, though that part of the business doesn’t seem to be as well thought out as the bistro side. Still, you might be able to find some interesting imported canned goods on the few shelves, and there are almost certainly some worthwhile prepared items in the display cases to take home.