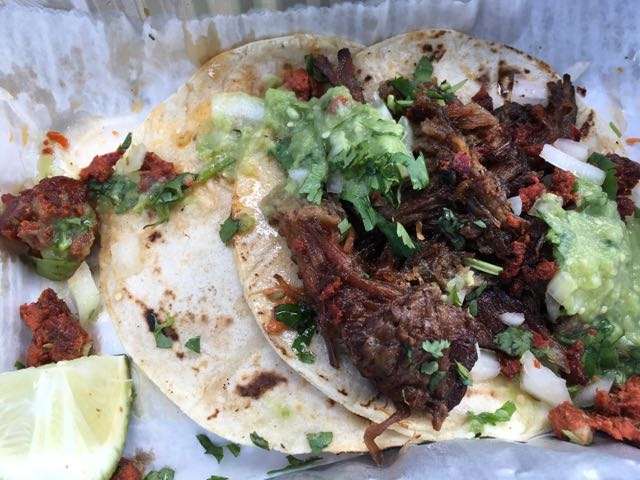 That Winter Park address, you’ll recall, was the site of the first 4 Rivers Smokehouse, before it outgrew the space and moved and multiplied.

Oh, and something else has returned: parking problems and teed off neighbors. As was the case when 4 Rivers had lines out the door, Hunger Street Tacos, too, is causing taco fanatics to cruise the surrounding blocks in search of parking, much to the consternation of the neighbors.

Don’t expect the traffic to calm anytime soon. The high quality of HST’s food should keep the crowds coming.

The brisket I mentioned was a main ingredient in the Campechano taco, and was heaped along with chorizo on a double layer of soft corn tortillas. A bit of fresh cilantro and a spicy avocado and tomatillo salsa added some brightness in the flavor.

There was also a good showing of chicken in the Quesadilla I sampled, though I’m not sure enough to justify the $4.80 charge. But it was a good quesadilla, a toasted flour tortilla with a buttery note, folded with the shredded meat, chihuahua cheese and some more of that good salsa. It was served piping hot and made for a substantial sandwich for one.

Hunger Street operates as a quick-serve restaurant. Place and pay for your order at the counter inside. If you’re going to chow down there, take a table stand with your oder number and grab a seat at one of the picnic tables on the back patio.

If you’re getting takeout, you can just have a seat outside the takeout window and someone will call your name. That’s what I did because I was afraid the neighbors were starting to circle my car.