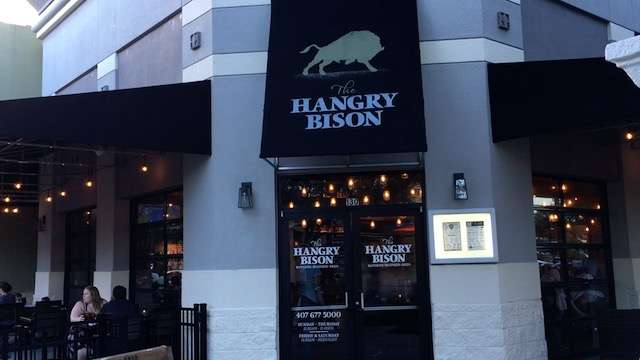 Hangry Bison is doing a lot of things right with its burgers, bourbon and beer, the items that it lists as its specialties under that name.

“Hangry” is a portmanteau of the words “hungry” and “angry” and represents a condition wherein the need for food, without any food foreseeable, can cause a precipitous change in mood. It’s a real thing! But we have Hangry Bison to alleviate the symptoms.

Burgers are the forte here, and they’re nicely done. I had the Hangry Bison (I figure it’s always a good sign when a menu item is named after the joint). It featured a big, thick patty fashioned out of ground bison, grilled to a juicy red medium rare and topped with a bit of melting pepper jack cheese and sriracha, both of which gave it a bit of heat, and fresh arugula for a note of fresh spiciness. Tomatoes, green olives and brown mustard were also included between the pretzel dough buns.

My companion chose the Doddzilla burger, which is obviously also a portmanteau, but I didn’t ask for explanation. This patty, though just as big and juicy, was made of shortrib meat and had melted cheddar, a slice of ham, onions sautéed in bourbon and bacon jam, plus a fried egg to boot. I’m not sure which burger I liked better, they were both pretty darn good.

I do know that I preferred the Sweet Potato Fries that my guest chose as the side dish. They were thick, fried just right and had a nice bit of saltiness. I preferred them to my Bison Beans, which were spicy-hot, as they were intended to be, but a tad too al dente. Plus, who wants to eat healthful veggies with a big fat burger?

Our server had an easy smile and showed good menu knowledge. She also showed enough savvy to give a heads-up warning before my Smoked Bison cocktail arrived. That was so I could be ready to record the showy presentation.

The drink, which featured Basil Hayden Bourbon, was delivered on a platter scattered with burnt cherry wood under a dome filled with smoke. I liked the smoky notes.

Besides the many options of preordained burgers, there’s a full section of the menu devoted to those who prefer to build their own burgers. You know, controlling types. Or just the chronically hangry.